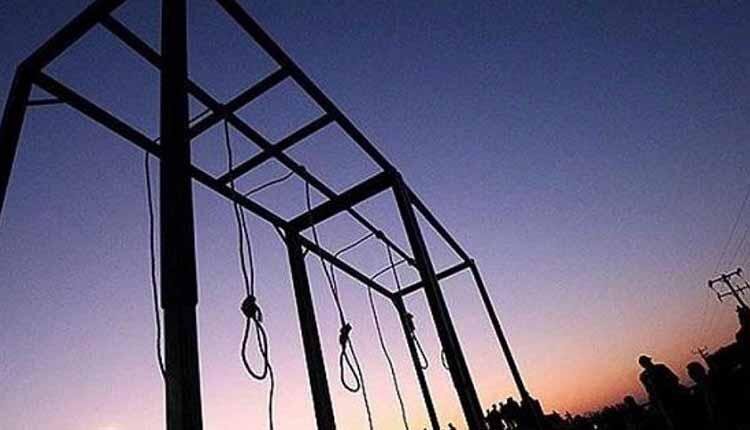 The authorities have sent ten prisoners to the gallows during the past few days, in the cities of Mahshahr, Nowshahr, Urmia, and Khandab. Two of the victims were hanged in public.
A woman was also among those executed.

A woman was also hanged on Wednesday, July 17, 2019, in the Prison of Noshahr, in northern Iran.

The state-run IRNA news agency, cited the General and Revolutionary Prosecutor of Kelardasht, Seyyed Farzad Hosseini, announcing the execution of this 43-year-old woman in the Prison of Noshahr. The semi-official news agency, ROKNA, also identified this woman as “Z.S.M.”
This is the 90th woman executed in Iran during Rouhani’s term in office since 2013.

Two inmates were also executed on Wednesday in Urmia prison in northwest Iran. Moharam Nemati and Asgar Bartar were the names of these two individuals.

In the early morning hours of Tuesday, authorities publicly hanged a prisoner in the city of Khandab, central Iran.
On the same day, a prisoner identified as Veis Alipour was hanged in the prison of Mahabad, western Iran. According to eye witnesses, the execution was carried out in the prison’s yard. His fellow inmates witnessed the execution from the window of their rooms and heard all the voices.

Four inmates were executed on Tuesday in Urmia prison. They were identified as Abdolkhalegh Royayi, Mohammad Aref Najafian, Heyman Banavand, and, Jahangir Mohammadi.

Iran is the world’s top record holder in per capita executions. More than 3,600 people have been executed in Iran since Rouhani took office in 2013.

The reason for those condemnations is the violation of basic human rights (especially of minorities), executions, brutal punishments such as amputation and flogging, and degrading behavior with prisoners.

According to the IranHRM Annual Report 2018, at least 285 people were executed in that year, 11 of them in public. They included 10 political prisoners and at least 4 women. Seven individuals were executed for crimes they allegedly committed as minors.

The clerical regime in Iran uses the death penalty as a tool to suppress and silence a disgruntled society the majority of whom live under the poverty line, are unemployed and deprived of freedom of speech.