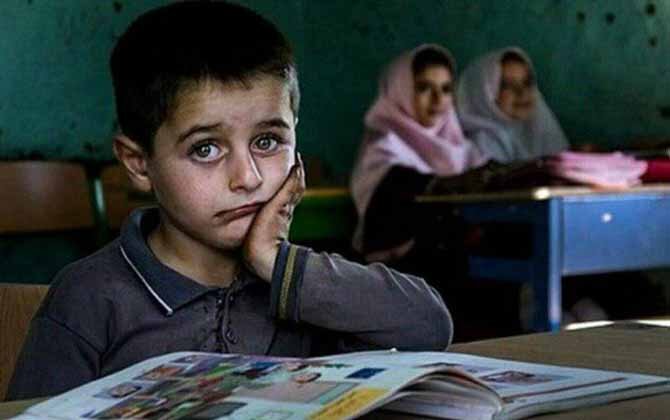 The new academic year in Iran begins with 15 million students going to school while the education and university communities are fed up with the drastic state of economy and society.

With the regime’s failure to provide free and mandatory education in Iran while more than 80% of the nation is living under the poverty line, there is no guarantee for children and youths to be able to continue their education in Iran.

It is estimated that seven million children are deprived of education. Many of them are child laborers, some of whose parents are addicted or are very poor. Some of them even do not have birth certificates.

Presently, one out of every four students drops out of school. According to the regime’s officials, the reasons for 53 percent of the dropouts are economic and financial problems as well as shortage of educational spaces.

The head of the Association of Skills Training Schools announced that 37 percent of Iranian students drop out of school before getting their diploma, and that only 7 percent of high school graduates are admitted to universities. (The state-run Fars news agency – November 4, 2017)

Some sources believe that “Only one out of every 12 children deprived of education in Iran, is identified.” (The state-run Alefba website, May 23, 2019)

The figures published by the Iranian state media show a downward trend in the number of college students, falling from 4,811,581 students in 2014-2015 academic year, to 3,616,114 in 2017-2018.  (See chart) That is an average of 398,000 less students per year despite new admissions. This cannot be explained but by pervasive poverty in Iranian society, lack of free education in Iran, and absence of any government support for college students. (The official IRNA news agency- December 30, 2018; the state-run Mehr news agency – October 23, 2017; the state-run Bazaarnews.ir – December 21, 2016)

Poverty, the main obstacle of education in Iran

The poverty crisis prevailing the country have become evident more than anywhere else in the country’s educational system.

A huge proportion of children in Iran leave school before receiving their high-school diploma due to poverty.

According to the regime officials 53% of dropouts are due to financial difficulties that families are facing.

According to experts, many of these children end up in child labor. Based on unofficial estimates, there are between 2 million and 7 million child workers in Iran who are not only deprived of a normal childhood experience but also exposed to violence and other types of abuse.

According to Article 30 of the Iranian Constitution, “The government is obliged to provide free elementary and high school education for all members of the nation and facilitate free higher education for all until the country is self-sufficient.”

In the past few years, Rouhani has ordered shut down of many schools in rural communities to cut down on budget.

The regime has also been gradually expanding its demands for tuition from students and their families, further contributing to school dropouts.

More and more universities have also been demanding tuitions and fees from students.

Mohammadreza Vaez Mahdavi, an adviser to the Minister of Cooperatives, Labor and Social Welfare, has acknowledged that “more than nine percent of Iranian families have to sell their furniture and home appliances due to the fact that they cannot pay for education with their normal income.”

The state-run Tasnim news agency interviewed an assistant professor at the Allameh University on this subject.

Substandard and unsafe schools and universities

Shortage of teaching spaces is among the most significant educational problems. Except for a limited number of schools, lack of physical education and recreational facilities is the common feature of all schools. In the girls’ schools and schools that are in low-income regions, particularly in the provinces of Sistan-o-Baluchistan, Hormuzgan, and West Azerbaijan, students are crammed into tight spaces which are way too far from basic educational and hygienic standards.

32,000 schools, that is one-third of the total number of schools across the country, are timeworn and lack immunity, and they must be razed and reconstructed.

The Chair of the City Council of Tehran, Ray and Tajrish, Mohsen Hashemi, disclosed that “700 schools in Tehran will be destroyed in case of a severe storm, let alone an earthquake.” (The state-run Khabaronline.com – December 14, 2017)

Criticizing education’s share in the government’s budget bill, a Tehran member of parliament, Farideh Oladghobad has disclosed that 50% of the capital’s schools are dilapidated.

In an interview with parliament’s news website, Oladghobad said in January 2018 that 50% of Tehran schools are in dilapidated buildings and this has dire “financial and life-threatening consequences”.

According to the Islamic Revolution Guards Corps, IRGC-run Tasnim news agency, in Tehran alone some 700 schools are in a state of ruin and are unsafe for students.

Even though these schools are listed as ‘ramshackle schools’ they still admit students annually and no one seems to care unless a disaster strikes, Tasnim insisted.

Earlier, when it was reported that eighty schools were demolished in 2017 November’s 7-3 magnitude earthquake in Kermanshah, western Iran, the Minister of Education, Mohammad Bathaei declared that one third of school buildings across Iran are unsafe.

Substandard school systems and structures and the government’s failure to renovate them have led to numerous accidents.

In December 2018, four girls died after suffering burns when a fire erupted at an elementary school in Zahedan, capital of Sistan and Baluchistan province. It is one of Iran’s most underdeveloped regions.

The incident indicated that the Iranian regime has not resolved safety issues that led to a similar tragedy in 2012.

Mohammad Ali Bathaii, made shocking confessions to reporters at a government meeting on December 12, 2018, saying, “Given the credit the government and the Education Ministry have, it is not possible to remove (the non-standard) heaters from schools in seven or eight

The mullahs’ Minister of Education had previously announced in 2017 that 42 percent of Iranian schools do not have a safe heating system.

Most teachers live under the poverty line

Considering the economic situation and liquidity in Iran, the minimum monthly expenses for a family of four in April 2019 was 8 million tomans ($700).

Mohammad Bathaei has been cited as saying, “Teachers have always had to have a second job to earn their living. Without any exaggerations if a teacher wants to earn his/her living just by teaching, they cannot have an average life.” (The state-run Tasnim news agency- March 3, 2019)

Vahid Mahmoudi, economist and a university professor, pointed out, “69% of the teachers drive taxis as their second job and 54% of the teachers have low income and little time.” (The state-run Tasnim news agency – March 3, 2019)

So, teachers who live under the poverty line and are always preoccupied by the thought of feeding their families can never focus on the quality of education they offer to students and cannot put enough time into it.

Repressive state of education in Iran

The most devastating policy in the universities and schools has been an institutionalized and incessant suppression which has regressed the educational system and driven it into a deadlock. At the same time, the regime answers every protest with imprisonment and torture.

The protests and bold expressions of opposition by teachers and spokesmen of the Teachers’ Trade Unions were also answered by long term prison sentences.

Moreover, harsher regulations aimed at controlling the political behavior of students in Iranian universities are being implemented.

The amended regulations passed by the Supreme Cultural Revolution Council’s Committee for the Islamization of Universities of Iran on April 21, 2019, empowers university authorities to punish students for their peaceful online activities.

The decision to tighten controls comes followed the arrests of hundreds of Iranian university students during December 2047/ January 2018 antigovernment protests.