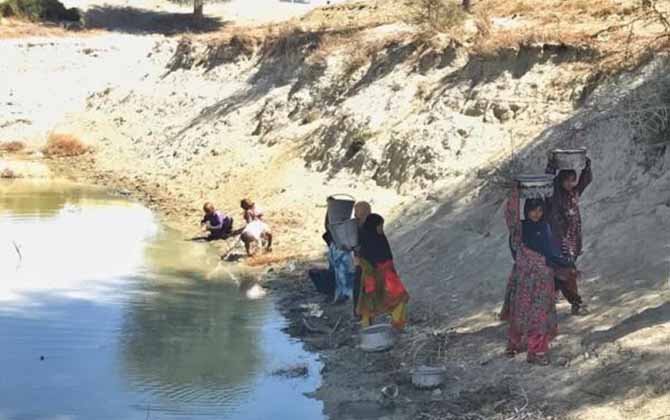 Lack of infrastructure and mismanagement of the water supply network has created water crisis in Sistan and Baluchestan province.

A Sistan and Baluchestan village water official said in July 2019 that close to half of the province lacked water supply networks.

Abdolahad Rigi, the head of the Sistan and Baluchestan Rural Water and Sewage Company told the ILNA state-run News Agency that from the 5,594 villages in the province, 2,868 villages did not have water supply networks.

The official said that the province needed 2,000 billion tomans to fund the water supply network project for the villages that lacked water networks.

Rigi said that 1,261 villages in the province used water tankers to supply their needed water.

Each person is allowed around 15 liters of water from the tankers. This is while according to international hygiene standards, a person living in a warm and dry climate needs 70 to 80 liters of water a day. As a result, the villagers are forced to provide their water needs from natural sources such as ponds, marshes and rivers.

Children are the main victims of this water crisis in the impoverished southeastern province.

Most recently two teenage Baluchi girls, Sara and Basmeh Kalamati, 14 and 16, were drowned in a water ditch or Hootag (a ditch used to collect rainwater for daily use of humans and animals due to lack of water supply systems in these regions. Women usually go to Hootags to do the dishes and wash their family’s clothes.)

The news was announced by Jamshid Sarani, governor of Dashtyari County of Chabahar, in the southeastern province of Sistan and Baluchestan. The two teenage Baluchi girls had gone to the Hootag to do their dishes and laundry when they fell into the ditch and drowned.

“The water for 100% of the villages in this county is provided by tankers that bring 15 liters of water for each person,” Sarani added.

The government has left the water supply projects for 210 villages in this region incomplete and done nothing to complete any of them.

Anvar Badpa, director of the Education Department of Dashtyari, also stated: “The drowned were two students who had gone to the Hootag outside of school hours to help their families; unfortunately, they fell into the Hootag and lost their lives.” (The state-run Khabar Fori, October 10, 2019)

“Many students have so far lost their lives while getting water from the Hootag,” he added.

In mid-July, a 10-year-old girl in the Keshari region lost her hand after she was attacked by a marsh crocodile while fetching water. She was identified as Hawa Raisi.

On July 25, 8-year-old Zakaria Charkh was attacked by a crocodile in a village in Chabahar while fetching water from a nearby marsh. He sustained injuries in the leg and was taken to the hospital.

Last year, it was reported that three girls and a woman drowned in a waterhole in the village of Zirdan, central Nik Shahr, located in the south of Sistan and Baluchestan Province, Iran. This was announced on August 28, 2018, by the Director of Accidents and Medical Emergencies Center in Iranshahr.

The four victims included three girls, 8, 11 and 14, and a 25-year-old woman all of whom had gone to bring water. The 8-year-old girl slipped as she was trying to drink water. The three others jumped in, one after the other, to save the little girl, but drowned in the mud pits of the waterhole.

In the past few years, close to 20 children have died in such incidents.

Although the detrimental effects of the water crisis have been an integral part of the daily lives of the people of Sistan and Baluchistan for decades, no effective action has been taken by national and regional authorities to control or improve conditions.

The UN’s Human Right to Water and Sanitation (HRWS) “entitles everyone to sufficient, safe, acceptable, physically accessible and affordable water for personal and domestic uses.”