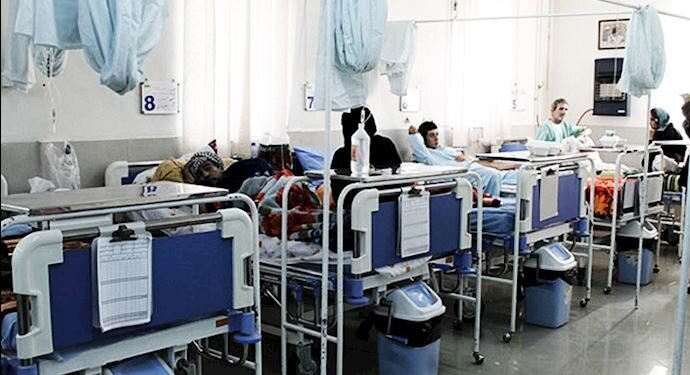 The Iranian Health Ministry has turned down an offer by Médecins Sans Frontières (MSF) to put up an inflatable hospital in Isfahan to treat COVID-19 patients.
The Iranian regime on Monday expelled a team sent by MSF which was there to help the coronavirus victims.
Earlier of March 22 the MSF sent a consignment of medical aid to Iran, including one field inflatable hospital, medicines, respiratory masks, and protective clothing.
Nine doctors and specialists were assigned to run the inflatable hospital.
A day later, Alireza Vahhabzadeh, an advisor to the regime’s minister of health, announced on his Twitter account that, since the national mobilization for confronting the novel coronavirus is underway, and “the Iranian Armed Forces’ medical capabilities are entirely at its service, Iran did not need hospitals established by foreigners. [Therefore], the MSF presence in Iran is irrelevant.”

#Iran's Minister of Health, announced that, since the mobilization for confronting the #coronavirus is underway, & “the Armed Forces' medical capabilities are entirely at its service, Iran did not need hospitals established by foreigners. The MSF presence in Iran is irrelevant.” https://t.co/Adn4K1dNeU

Tehran rejected the offer of medical help by the MSF while the coronavirus has taken the lives of thousands of Iranians and the deadly virus is rapidly spreading across the country due to the regime’s inaction and cover-up.
Meanwhile, at least one hundred Iranian health workers in under equipped hospitals have died in Iran’s COVID-19 outbreak. Health workers, including doctors and nurses at the front lines of the fight against the deadly virus, lack basic protective equipment.
The regime’s Ministry of Health announced Wednesday that the number of newly infected patients in the past 24 hours is 2,206, up 25% from yesterday, and 130% higher than last Saturday.
At the same time, the Governor of West-Azerbaijan said the number of patients and carriers of the virus is several times the number reported.
Mohammad Hossein Ghorbani, Health Ministry’s representative in Gilan, said, “Gilan is still the epicenter for the Corona crisis … If the second wave of corona outbreak starts, the damage will be far greater than the first stage … We are concerned since our medical staff are exhausted due to weeks of hard and nonstop work.”
On Monday, March 23, 2020, state-run Shargh daily quoted the Ministry of Health’s Epidemiological Analysis Working Group, as suggesting that until mid-May, between 811,000 to 1.16 million will be infected by the virus in Iran.