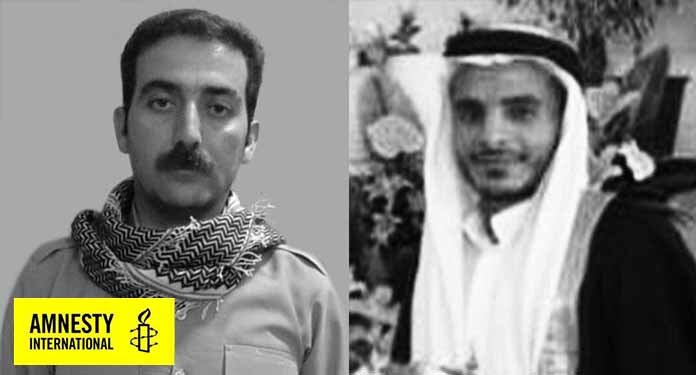 Amnesty International has called on the Iranian authorities to immediately reveal the truth about the fate and whereabouts four death row prisoners who have been transferred to an unknown locations.

“The authorities’ refusal to provide the families of the men with information has sparked fears that they are at risk of being tortured or executed in secret”, the London-based rights group said in a statement on Wednesday, May 13.

Hossein Silawi, Ali Khasraji and Naser Khafajian three death row prisoners from Iran’s Arab minority, have been forcibly disappeared since 31 March 2020 and Hedayat Abdollahpour, a death row prisoner from Iran’s Kurdish minority, since 9 May 2020 after being transferred from their usual places of detention to undisclosed locations.

“Their enforced disappearance has taken place amid an apparent rise in the number of executions since April 2020,
including in prisons populated by ethnic minorities, which has further heightened concerns about their safety and wellbeing,” AI asserted.

Iranian law requires the authorities to inform lawyers of the scheduled execution of their clients 48 hours in advance and
grant families the right to visit their loved ones for the last time. In practice, however, the authorities have a long-standing record of secretly executing members of ethnic minority groups after transferring them to unknown locations and refusing to reveal their fate and whereabouts for months or even years.

“All four men were sentenced to death following grossly unfair trials and amid serious torture allegations, which have never been investigated. They were denied access to their lawyers and families, as well as to any details of the evidence against them, during the investigation period”, AI disclosed in its statement.
“According to individuals with direct knowledge of their cases, security and intelligence officials repeatedly pressured them to make self-incriminating statements, which were then used by courts to issue convictions against them.” AI added.

According to a statement issued by the spokesperson of the judiciary on 14 January 2020, Hossein Silawi, 31, Ali Khasraji, 27, and Naser Khafajian, 34 have been sentenced to death in connection with an armed attack on a police station in 2017, in Ahvaz. Amnesty International believes that the proceedings which led to the men’s conviction and sentencing were grossly unfair.
The men have said that they were held for months in solitary confinement in a ministry of intelligence detention center in Ahvaz, without access to their families and lawyers, and were subjected to torture and other ill-treatment by their interrogators to “confess”, reportedly resulting in their ribs or hands being broken.

Hedayat Abdollahpour, who has been on death row in the central prison in Urmiah, West Azerbaijan province, since
2017, was transferred to an undisclosed location with no declared reason on 9 May 2020. Since then, his distressed
family has sought information about his fate and whereabouts from various official entities.
However, these official bodies have all refused to provide them with any information.
In response to the family’s efforts, the deputy prosecutor in Urmia told his family on May 12: “When the ministry of intelligence and the Revolutionary Guards do not tell you where your relative is, you better refer to the cemetery.”

Hedayat Abdollahpour was arrested in Oshnavieh on August, 3, 2016, in connection with an armed clash between the
Revolutionary Guards and members of Kurdish Democratic Party of Iran (KDPI) which took place on 14 June 2016. On January 20, 2017, following an unfair trial, Branch 1 of the Revolutionary Court in Urumieh convicted him of “taking up
arms against the state” (baqi) and sentenced him to death.

His conviction was based on his alleged membership in KDPI, which he has denied, and no evidence pertaining to his involvement with armed clashes was presented at his trial. The Court also ignored and failed to order investigations into his allegations of torture and other ill-treatment during the 78 days of his solitary confinement in a detention facility in Almahdi military barracks in Urmiah, which is run by the Revolutionary Guards.
Hedayat Abdollahpour has said that he has lost hearing in one ear as a result of the torture to which he was subjected during this period to “confess”.