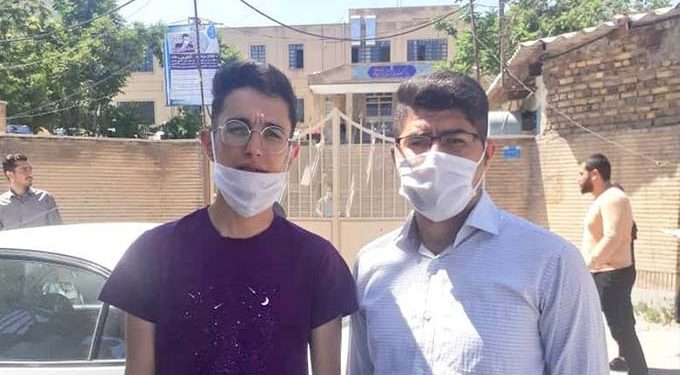 Two men were flogged today for participating nationwide protests in the city of Urmia, northwest Iran.
Azerbaijani rights activists Ali Azizi and Eliar Hosseinzadeh, were arrested in November 2019 after participating protests against a hike in petrol prices in November 2019.
The Branch 101 of the Criminal Court of Urmia presided over by Judge Hamid Goli Nejad charged sentenced the two protesters each in March to 20 lashes and a fine instead of eight month imprisonment on the charge of “disturbing public order”.
Ali Azizi could not attend the trial because he was detained in the security ward of Tabriz Central Prison and his trial was rescheduled at his request. Therefore, he was summoned by Branch 101 of the Criminal Court of Urmia in April. The court rejected his defense and upheld the verdict.
Ali Azizi was arrested on February 23, in his home in Urmia by the state security forces without an arrest warrant. He was temporarily released on bail on March 25, pending trial.
Eliar Hosseinzadeh was also sentenced in absentia.
The Iranian regime is one of the few states that still uses degrading punishments, even though all international civil and political rights conventions have prohibited the use of inhumane punishments such as execution and flogging.
The authorities regularly hand out flogging sentences to protesters, dissidents, and to those charged with adultery and theft, among other things.
On June 6, a man in southwestern Iran was flogged 55 times for criticizing and “refusing to apologize” to the local representative of the regime’s Supreme Leader. Ruhollah Barzin, who works in a bakery in Charam, Kohgiluyeh and Boyer-Ahmad Province was flogged flogged for writing a post critical of the Friday prayer leader of Cheram, Nourullah Afshar, and  “refusing to apologize” to him.