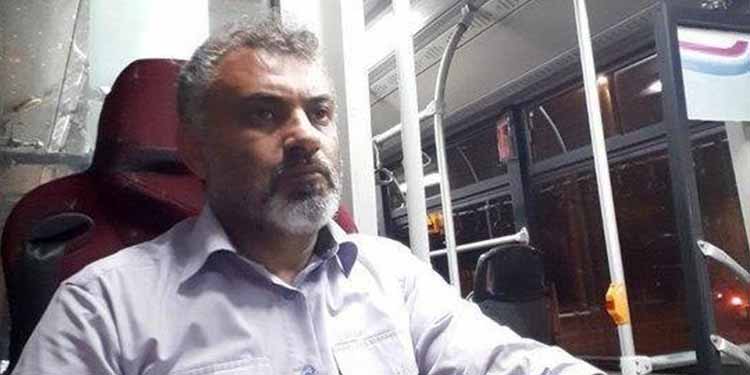 Rasoul Taleb Moghaddam, a labor activist and member of the Syndicate of the Workers of Tehran and Suburbs Bus Company (SWTSBC) was arrested to be flogged 74 times today in Evin Prison.

Rasoul Taleb Moghaddam surrendered himself at Tehran’s Evin prison  and there he was flogged 74 times, the SWTSBC reported.  He was taken to a quarantine ward even though he was injured.

Taleb Moghaddam had been repeatedly threatened to either report to law enforcement or have his bail confiscated.
Taleb Moghaddam, was initially arrested during the Labor Day gathering in Tehran on May 1, 2019 and was taken to ward 209 of Tehran’s Evin Prison controlled by the Iranian Revolutionary Guards Corps. He was released on bail a few days later.
A court hearing of his charges was held on May 13, 2019 at the Branch 26 of Tehran Revolutionary Court judged by Iman Afshari. The court sentenced the buss driver to 74 lashes, two years of prison, two years of exile to a remote location in South Khorasan province, and a two year ban on using smartphones and membership in political and social parties and groups on the charges of “propaganda against the state”, and “disrupting public order”.
In recent months many workers and labor activists have received heavy sentences for peacefully exercising their rights.
Iran’s Labor Code does not grant citizens the right to form independent unions, despite Iran’s ratification of the UN’s International Convention on Civil and Political Rights and membership in the International Labor Organization.
Workers are regularly threatened, detained, tortured and even sentenced to flogging, despite their legitimate demands and protests to current conditions which has robbed them of more than 80% of their purchasing power.