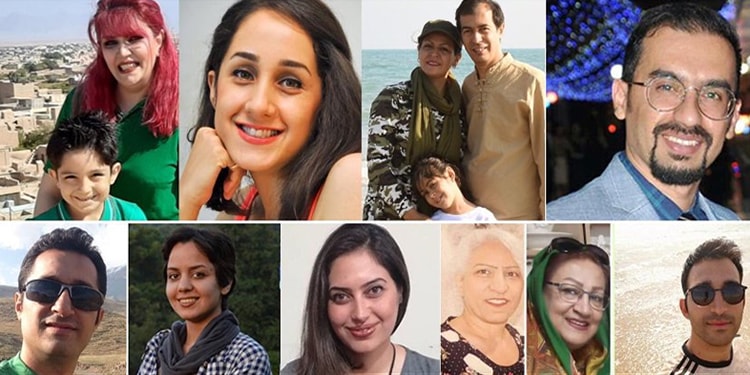 The men and women have been identified as Farham and Shahnaz Sabet, Farzan Masoumi, and Soheila Haghighat.

Farham Sabet, Farzan Masoumi, Shahnaz Sabet, and Soheila Haghighat were each sentenced to two years in prison.
In their initial court hearing in the 1st Branch of the Shiraz Revolutionary Court, Judge Seyed Mahmoud Sadati sentenced each of them to six years of prison on charges of “spreading propaganda against the state and membership in opposition groups”.
Earlier, another seven Bahais were sentenced to a total of 19 years and 6 months of prison and a fine of 1 million tomans (about $50).

Ehsanollah Mahboub-Rahvafa was sentenced to a fine of 1 million tomans.

Elahe Samizadeh was sentenced to another year of prison by the 105th Branch of the Shiraz Criminal Court and a two-year ban from public and state services. Niloufar Hakimi was also sentenced to another five years of prison by a criminal court.
The Court of Appeals of Fars Province had previously upheld the six-year prison sentence for Bahai citizen Shahriar Atrian, without a court hearing.

These Baha’i citizens were arrested between 2016-2019 by security forces and were released on bail until their trial.

The Baha’is are Iran’s largest religious minority with 300,000 followers. For decades they have been arbitrarily detained, denied education and livelihood, harassed, vilified in the media, and executed. Hundreds were killed after the 1979 revolution. Baha’is have no legal protection as a minority because their faith is not recognized under the constitution.