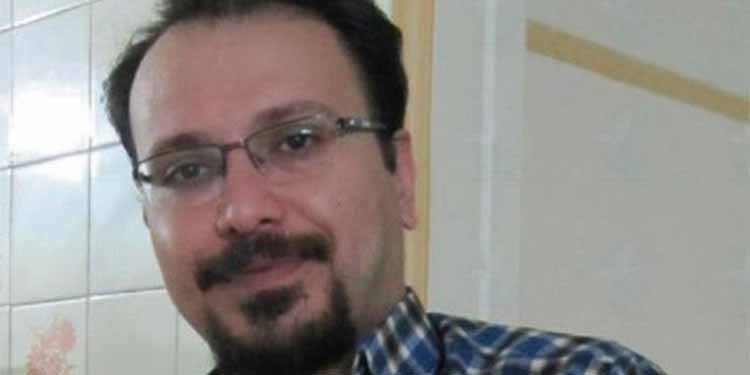 Ahmadreza Haeri, a Kurdish activist was flogged 74 times today at Tehran’s notorious Evin prison.
He surrendered himself on Saturday, July 25, to be punished by 74 lashes and start serving a six-month sentence.
Ahmadreza Haeri has been transferred to the Greater Tehran Penitentiary.

Tehran’s appeals court in February sentenced Haeri to prison and lashes on the charges of “spreading propaganda against the state” and “disrupting public order”.

He was summoned to the Execution of Sentences Branch of Evin Prison in early July to serve his sentence of imprisonment and being flogged.

Ahmadreza Haeri was arrested in April 2014 for protesting a brutal raid and assault on political prisoners in Evin Prison’s Ward 350, which has now been called “Black Thursday.”

He was detained in solitary confinement of the IRGC intelligence detention center for some time before being released on bail until the end of his trial.

On April 17, 2014, more than one hundred guards and intelligence agents raided Evin Prison’s Ward 350, where Political prisoners and prisoners of conscience were held.

The violence began when prison officials and plain-clothes men, some covering their faces with masks and sunglasses, reportedly conducted a search of prison cells, sparking a protest by prisoners who demanded to be present when the search was being conducted. The prisoners’ protest was met with brutal force.

Political prisoners were brutally beaten and more than 30 of them sustained serious injuries.

At least 32 prisoners were taken to solitary confinement in Section 240 of Evin prison in the aftermath of the raid.

Some family members of the prisoners were harassed and intimidated by the authorities for speaking out about their injured relatives. Many received text messages from an unknown number warning that they would “face consequences” if they attended a planned gathering outside Tehran’s Office of the Prosecutor. Some people, including Ahmad Reza Haeri, who were campaigning on behalf of their relatives in prison were arrested in order to stop them speaking out.

The Iranian regime regularly hands out flogging sentences to protesters and dissidents. As a party to the International Covenant on Civil and Political Rights (ICCPR), Iran is legally obliged to forbid torture and other cruel, inhuman or degrading treatment or punishment. However, judges routinely hand out the punishment along with imprisonment.