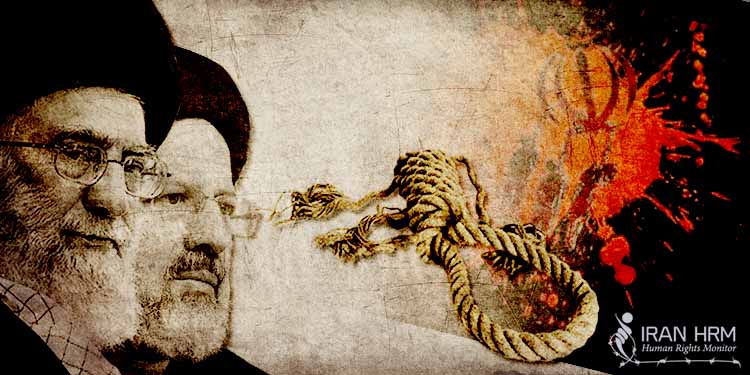 On World Day Against the Death Penalty, Iran Human Rights Monitor calls for a halt to the executions of political prisoners and the abolishment of the death penalty in Iran.

The death penalty is gradually being removed from the list of legal punishments in today’s world. The clerical regime does not have any intention of abolishing the death penalty in Iran. On the contrary, they defend and support extensive use of this punishment.

The question is: Does the Iranian Judiciary use the death penalty in Iran as a legal verdict, or as a tool for repression?

The Iranian regime has executed thousands of people over the past four decades. This includes the massacre of 30,000 political prisoners in 1988.

The developments in recent months attest that the regime has resorted to the execution of protesters after the November 2019 uprising. Beset by irremediable domestic and international crises, the regime is intent on preempting public protests.

They believe that they could terrorize the public by issuing death verdicts and in this way prevent any likely future protests. They seek to suffocate any voice of protest and all calls for freedom in the chaotic situation that prevails Iran.

In many cases over the past months, the regime accused the protesters arrested in previous years of “corruption on Earth.”

According to Article 183 of the Islamic Punishment Law, the punishment for “corruption on Earth” are among the harshest, including the death penalty.

Despite worldwide outcry, the clerical regime executed Navid Afkari, a 27-year-old wrestling champion, on September 12, 2020. The extra-judicial execution was hastily carried out, without informing the victim, his family or his lawyer, and outraged international and domestic public opinion.

Mostafa Salehi was one of the protesters who had been arrested during the protests in December 2017-January 2018. He was hanged in Dastgerd Prison of Isfahan on August 5, 2020.

Both victims had been viciously tortured during their detention and under interrogation. They were forced to make false confessions against themselves. They were also deprived of access to legal counsel. Both of them denied the charges levelled against them during all the stages of their sham trials.

At least 200 people were executed in Iran in 2020 by the end of September. This includes five women and four people who were minors at the time of their crime. At least 18 people were also executed on drug related charges.

These executions provoked massive public outrage. Social media users have millions of times tweeted #StopExecutionsinIran and the Persian hashtag of #DoNotExecute. In this way, they expressed their denunciation of the death penalties issues, upheld and carried out in Iran.

The Iranian Judiciary, however, has continued to crack down on protesters and political prisoners and put pressure on them by handing down heavy prison sentences.

Following are the names of 32 death row political prisoners in Iran:

Amir Hossein Moradi, Saeed Tamjidi and Mohammad Rajabi were all sentenced to death for their participation in November 2019 protests in Tehran and for being “riot leaders” according to the regime’s Judiciary.

Amir Hossein was brutally beaten by security forces during interrogations after his arrest. According to a source close to his family, he said that he was subjected to electric shocks and told that if he did not cooperate, his stay in solitary would be prolonged. He also said that an agent stood on his chest, damaging his rib cage.

Mohammad Rajabi and Saeed Tamjidi have said they were kicked, hung upside down and repeatedly beaten.

Amir Hossein’s “confessions” were used as evidence by the court to convict all three. He told the judge during his trial that he was forced to confess under torture and retracted his confessions.

Saeed and Mohammad fled to Turkey after Amir Hossein’s arrest but were deported back to Iran where they were arrested.

Hadi was detained on March 10, 2019, for participating in nationwide protests in January 2018. He was tortured during interrogations for at least 40 days after his arrest.

The revolutionary court had brought eight accounts of vaguely defined national security charges against the five Iranian death row protesters including “corruption on earth,” “moharebeh” (enmity against God), and “baghi” (armed rebellion) through the use of firearms.

Mohammad Keshvari was detained for his role in November 2019 protests. He was sentenced to death by the Revolutionary Court on June 28.

The Kurdish political prisoner was sentenced to death following and unfair trial which relied on “confessions” obtained without the presence of a lawyer and under torture and other ill-treatment.

He was shot by security forces on November 4, 2017, while working as a porter and was arrested despite his injuries. Ebrahimi is being held in Urmia Central Prison. He is married and has a disabled child.

Iranian Kurdish prisoner Heidar Ghorbani, 47, is at risk of execution for “armed rebellion against the state” (baghi), despite serious fair trial violations and the trial court confirming that he was never armed. His conviction is based on torture-tainted “confessions”, obtained while he was forcibly disappeared.

The nine Sunni prisoners detained in Vakilabad prison in Mashhad have been sentenced to death by the Revolutionary Court of Mashhad since 2019.

The men were arrested in 2009 for the murder of Abdolrahim Tina, a Sunni cleric. They have also been charged with “acting against national security”, “spreading propaganda against the state”, “membership in Salafi groups”, “corruption on earth” and “moharebeh” or waging war against God.

They have denied the murder of the Sunni cleric and say they were arrested solely for their religious activities. Iran is a predominantly Shia country and the regime discriminates against the Sunni minority.

Farhad Salimi, is a 42-year-old Sunni cleric from Saqqez, western Iran. Forty-one-year-old Qasem Abasteh, Davoud Abdollahi who is married and is the father of two, and 36-year-old Kamran Sheikheh are all from Mahabad, also in Western Iran.

The men have said that they were severely tortured during their initial detention to make false confessions. Over the last 11 years, they have been denied medical treatment and have been subjected to pressure in prison.

He was arrested in 2009. This prisoner is a Sunni detainee and is being held in Gohardasht prison in Karaj.

The proceedings which led to the men’s conviction and sentencing were grossly unfair, according to Amnesty International. The men have said that they were held for months in solitary confinement in a ministry of intelligence detention center in Ahvaz, without access to their families and lawyers, and were subjected to torture and other ill-treatment by their interrogators to “confess”, reportedly resulting in their ribs or hands being broken.

Kurdish political prisoner Shaker Behrouz ,32, was sentenced to death by Branch 2 of the Orumiyeh Revolutionary Court. The death sentence was announced to his lawyer on Thursday, September 10, 2020. He was tortured into giving false “confessions”.