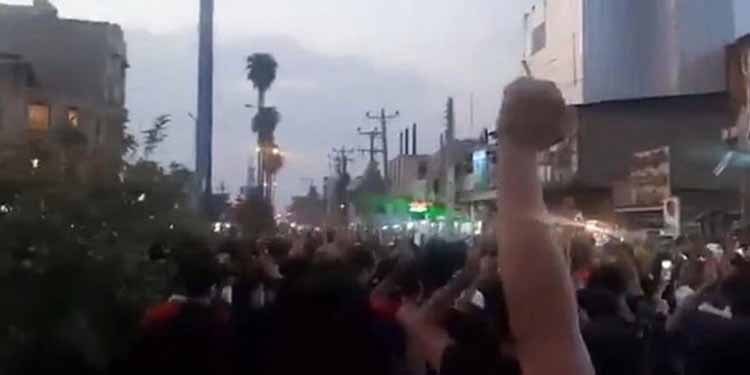 Khuzestan water protests continued for the seventh consecutive night on Wednesday in several cities in the southwest province.

In several videos, security forces are seen in the cities of Masjed Soleiman, Izen, Ramshir, Avaz, Mahshahr and Susangerd with gunshots being heard.

In a video from Ahvaz which was circulated on social a young man speaks to the riot police who is apparently shooting at him.

In this video, the sound of gunfire can be heard at least once.

However, the scope of the protests went beyond Khuzestan and in some cities such as Isfahan and Karaj, slogans were chanted in support of the Khuzestan water protests.

Many protesters were injured and detained, although details of their identities have yet to be published.

As protests continued in various parts of Iran, Netblocks, an organization that monitors international Internet outages, reported ongoing internet disruptions in the southwestern province of Khuzestan starting on July 15.

Social media reports indicate that several protesters were killed during the seven nights of protests. We have confirmed two of the killings.

The Governor of Dezful, another city in Khuzestan that joined the protests last night also warned protesters. He called protesters “rioters” or “seditionists” and said those who “took advantage” of farmers’ protests by blocking roads and causing “problems” would be “severely dealt with”.

This is while after seven nights of protests, the water problem has not been solved in the southwestern province. Security forces used brutal force against demonstrators from the first day of the protests by Iranian Arabs, who were only chanting for water.

Referring to slogans aimed at the regime and its Supreme Leader, outgoing president Hassan Rouhani attacked protesters today for chanting “false” slogans that “makes the enemy and those who are anti-Iran happy”.