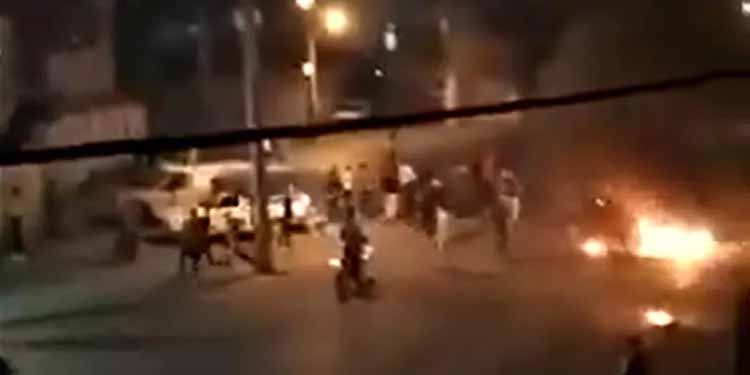 Water protests in Iran extended into an eighth day on July 22, while the state security forces used deadly force to crack down on protesters.

The protests continued in cities such as Bushehr, Mahshahr, Behbahan, Izeh, Ahvaz and other cities in Khuzestan province.

Demonstrations in support of the people of Khuzestan also took place in cities such as Aligudarz in Lorestan province and Shahinshahr in Isfahan province, with the security forces openine fire on protesters.

Videos posted on social media show a person killed and several others injured in Aligudarz on Thursday evening. Riot police shot tear gas and used pellet guns and even live bullets against protesters.

State-run media also confirmed the death of one unidentified person during water protests in Aligudarz, western Iran. According to IRIB, a 20-year-old man was shot and killed by “unknown elements” and two 16-year-old teenagers were injured.

Many protesters were shot with pellets and numerous videos showed the bodies of young men and even children injured and bleeding from the wounds.

Local reports said Islamic Revolutionary Guards Corps (IRGC), used by the regime for brutal crackdowns, arrested dozens of protesters in the past two days in Ahvaz and other cities in Khuzestan Province. The detainees were taken to unknown locations.

The death of at least eight protesters has been confirmed since the beginning of the water protests in Iran. On Thursday, a 17-year-old Hadi Bahmani, who was killed by security forces during the protests in Khuzestan, was buried. Hadi Bahmani was a worker from Izeh.

Internet disruptions continued the eighth night, locals reporting they had no mobile network.

The report wrote that video footage from the past week, coupled with consistent accounts from the ground, indicate security forces used deadly automatic weapons, shotguns with inherently indiscriminate ammunition, and tear gas to disperse protesters.

Regime officials vow to crackdown on water protests in Iran

As protests intensify in Khuzestan and spread to other Iranian cities, Iranian officials have announced that protesters will be dealt with. The governor of Behbahan called the protesters “norm-breakers” and the Ahwaz prosecutor called them “troublemakers, foreign mercenaries, hypocrites and separatists” and threatened that they would face “severe” treatment.

The Governor of Dezful, another city in Khuzestan that joined the protests last night also warned protesters. He called protesters “rioters” or “seditionists” and said those who “took advantage” of farmers’ protests by blocking roads and causing “problems” would be “severely dealt with”.

Ali Shamkhani, the secretary of the Supreme National Security Council, claimed on his Twitter account that the security forces were ordered to release the recent detainees who had not committed any criminal acts. He claimed that the protesters were released while the provincial authorities of Khuzestan and other cities did not provide information and statistics on the number and names of those arrested.

Officials in the Iranian regime blamed the killings and injuries on “rioters” or “seditionists”. The regime uses the word seditionists to refer to protesters. State-run media said 26-year-old Mostafa Naeemawi was killed by “seditionists” in the water protests in Iran.

“We will not allow some opportunists in the province of Khuzestan create insecurity,” Qasem Rezaie, the Deputy Commander of Iran’s Police force, said in a video message, according to state-run media. He also added that the “people of Khuzestan” will not allow foreign-dependent groups to threaten their peace and security.

This is while after eight nights of protests, the water problem has not been solved in the southwestern province. Security forces used brutal force against demonstrators from the first day of the protests by Iranian Arabs, who were only chanting for water.