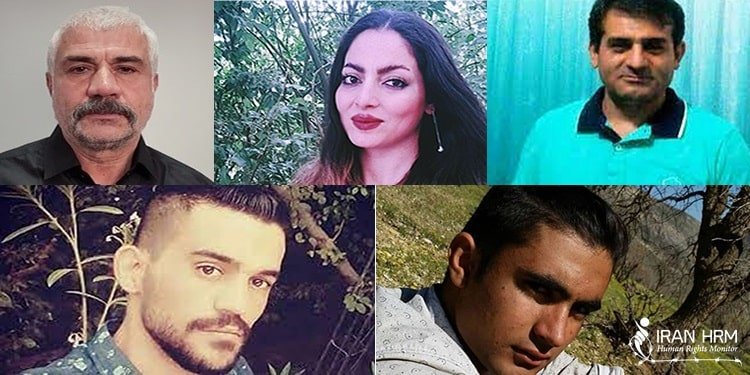 Political prisoner Ebrahim Sediq Hamedani has been on a hunger strike since February 12, 2022, over the failure of the authorities to fulfill their promise to transfer him and his son, Salar Sediq Hamedani, to Sanandaj Prison.
On February 26, 2022, Hamedani’s son, Salar, was transferred from Kamyaran Prison to Urmia Prison, but were returned to Kamyaran Prison due to the opposition of the supervising judge.
Mr. Khalil Sedighi Hamedani, 63, and his son Salar, were abroptly transferred on January 7, from Urmia Prison to Marivan and Kamyaran Prisons where they have been incarcerated alongside common criminals.

Political prisoner Fariba Assadi went on a hunger strike in protest of being beaten by one of the prisoners accused of ordinary crimes and the violation of the principle of separation of crimes in Qarchak Prison.
Ms. Assadi began her strike on Sunday, February 27, 2022.
Security forces arrested Fariba Assadi at her home in Tehran on January 3, 2022. They transferred her to the Qarchak Prison to serve her prison time.
The Revolutionary Court of Shahriar sentenced political prisoner Fariba Assadi to one year in prison on October 2, 2021.
Intelligence agents arrested Fariba Assadi in February 2021 along with three others. They faced charges such as “propaganda against the state” and “membership in opposition groups.” Later, Ms. Assadi gained her temporary release on bail.

Ailing civil society activist Arsham Rezaei, jailed in Raja’i Shahr prison in Karaj, has been on hunger strike sinceFebruary 6, 2022 to protest the authorities’ denying him medication and other essential treatment.
Arsham Rezaei, 30, had been suffering from severe digestive and stomach pain for months without access to adequate specialized healthcare before the authorities eventually transferred him to Rajai Hospital in Karaj on February 1, 2022. After an endoscopy, doctors determined that he’s suffering from a hiatus hernia, digestive ulcer and stomach infection & prescribed him medication. However, the authorities have so far failed to provide him with needed medication and also denied him early release from prison.

Civil society activist Ali Musa Nejad Farkush, imprisoned in Raja’i Shahr prison in Karaj, has been on a hunger since February 1, demanding the release of political prisoners and prisoners of conscience. He has also been refising to take medications.
During this time, he has experienced a drop in blood pressure and weight loss.
Ali Musa Nejad Farkoush was arrested by security forces on January 10, 2019, and was released on bail temporarily until the end of the trial. In June 2019, he was sentenced by Branch 28 of the Revolutionary Court of Tehran to eight years in prison on charges of conspiracy to commit crimes against internal and external security, insulting the leadership and insulting Khomeini, and propaganda activities against the regime. The sentence was upheld by Branch 36 of the Court of Appeals of Tehran Province in March 2020.
Ali Musa Nejad Farkoush began serving behind bars in November 2020.

Mohammad Houshangi, has been on a hunger strike since February 23, in protest of his long detention and the judge’s refusal to grant bail.
He has been in custody in Urmia Prison since December 2020.
Mohammad Houshangi was arrested by security forces in Tehran in December 2020 and then transferred to the IRGC Intelligence Detention Center in Urmia. The 23 year-old was finally transferred to Urmia Prison after 7 months. He is accused of being a member of dissident groups.