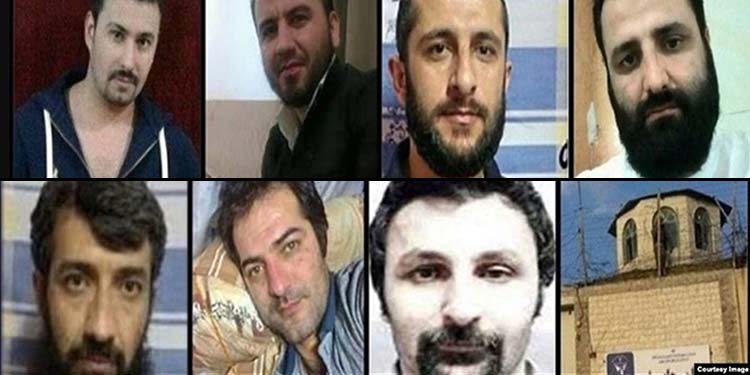 Amnesty International issued a statement on March 2, warning that seven tortured Kurdish prisoners are at risk of execution at Raha’i Shahr prison, near Tehran.
According to Amnesty International Anwar Khezri, Ayoub Karimi, Davoud Abdollahi, Farhad Salimi, Ghassem Abesteh, Kamran Sheikheh and Khosrow Basharat, all from Iran’s Kurdish Sunni minority, were convicted of “corruption on earth” (efsad-e fel-arz) and sentenced to death in grossly unfair trials marred by claims of torture to extract “confessions”.

The report said that Anwar Khezri, Ayoub Karimi, Davoud Abdollahi, Farhad Salimi, Ghassem Abesteh, Kamran Sheikheh and Khosrow Basharat, all from Iran’s Kurdish Sunni minority, are accused of membership in “Salafist groups”, which they all deny.

The men were also later accused of fatally hitting a man by a car – they deny involvement in his death.

The report also states that they were sentenced to death by Branch 15 of the Revolutionary Court of Tehran around June 2018, during a trial in which the presiding judge barred their lawyer from speaking.

It also urged Ejei to ensure that their torture allegations are effectively and independently investigated with a view to bringing those suspected of responsibility to justice in fair trials.

In the complementary part of its statement, the human rights organization described some details related to the torture of these seven prisoners.

At least four of the seven Kurdish detainees wrote open letters about the torture of intelligence agents during their interrogation.

Anwar Khezri wrote in February 2020 that he had attempted suicide after being subjected to 56 days of torture following his arrest, including repeated beatings to his chest, head and soles of his feet in a Ministry of Intelligence detention facility – to which he referred as a “torture chamber”.

After receiving blood transfusions in hospital for blood loss related to his suicide attempt, agents returned him to prison the next day against medical advice. He said he was then forced to sign “confessions” after his torture resumed. According to an informed source, following arrest, Khosrow Basharat was repeatedly beaten with electric cables while tied to a bed, suspended by his cuffed hands from the ceiling for prolonged periods, and forced to listen to the screams of what sounded like others being tortured at night, which led to sleep deprivation and severe distress. After three weeks of such torture, he was forced to sign a pre-written “confession”.

Lawmakers in the European Parliament passed a resolution on Feb. 17 which called on Iran to introduce an immediate moratorium on its use of the death penalty, following a sharp rise in executions.

Iran currently has the world’s highest rate of executions per capita.

The resolution — passed by 617 votes to eight with 59 abstentions — said there had been “a significant rise in the number of executions, including of women” since Iranian President Ibrahim Raisi took office in August.