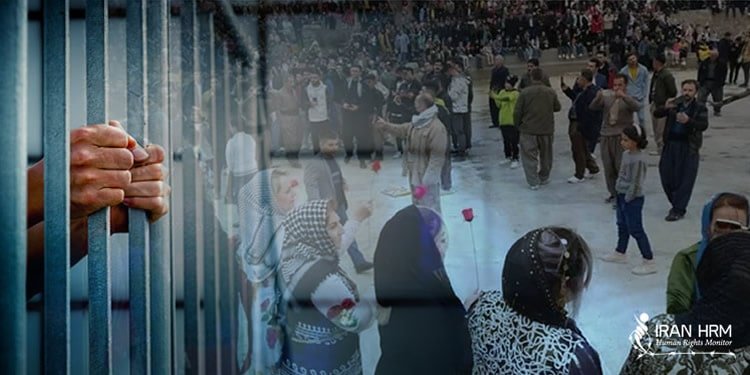 March 2022 saw the continuation of human rights violations and repression on civil society by the Iranian regime.

In March every year Iranians celebrate Nowruz. It is a two-week celebration beginning from March 20, that marks the beginning of the Persian New Year and the official beginning of spring.

But the ruling regime increased its repression on civil society. The state security forces even attacked the Nowruz celebration in western Iran.

The Revolutionary Guards held a meeting with 300 members of the city, village, and district councils in Sanandaj and informed them that all Nowruz-related ceremonies should be under the supervision and information of the IRGC; Otherwise, no ceremony will be allowed.

In addition, at least 50 citizens and activists from Marivan and dozens from other cities in Baneh, Sarpolzahab, Javanroud and Saqez were summoned and threatened by the IRGC intelligence. They were forced to sign pledges not to participate in any Nowruz ceremony.

Just hours after the start of the new year on March 20, a special unit raided a ceremony in Oshnavieh, in West Azerbaijan Province. Local sources reported that the special unit used tear gas and pellet guns to disperse the crowd.

The state security forces also attacked a park in Sanandaj and arrested citizens for celebrating Nowruz on March 21. A 75-year-old woman identified as Batul Azimi and a 14-year-old child identified as Aryana Salimi were among those arrested.

In this regard, Qassem Rezaei, the Deputy Commander of the NAJA (Persian acronym for the Police Force), during his visit to Kurdistan, stated about the government’s latest plan to control the lack of hijab that “women with bad hijabs will be dealt with on the scene.”

His remarks can be considered as a greenlight to the state forces to deal with women in public.

Iran Human Rights Monitor, while publishing the report, draws the attention of relevant international and human rights organizations to the deteriorating situation of human rights in Iran.

This situation, which has worsened especially during the tenure of Ebrahim Raisi as a major human rights violator, must be stopped and the regime officials must be held accountable internationally for their gross human rights violations.

Carrying out of more than 39 executions in March 2022 indicates the grim violation of the right to life by the Iranian regime’s judicial system. Nineteen of the victims had previously been sentenced to death on drug-related charges and another 20 on murder charges.

Iran has the highest rate of executions per capita in the world.

In a note from Rajai Shahr Prison in Karaj, jailed activist Saeed Eghbali, wrote about his observations about the weekly executions in this prison.

According to the note, which was published on March 24, Wednesday mornings are the days of executions in Raji Shahr Prison.

Eghbali wrote that sometimes two or three death row prisoners and sometimes up to ten are transferred to a section near ward 4 to serve their sentences.

Saeed Eghbali said that prison officials and the prosecutor are present to assure the implementation of the death sentence and the prisoners’ death.

“The sound of cars coming and going on Tuesday nights to carry out executions can be heard through the fenced windows of my room,” he wrote.

In addition, Hatem Azdmir, a Turkish citizen, was sentenced to death in Khoy, in northwest of Iran, on charges of “Baghi”. Firuz Musa Lou in Urmia also received a death sentence on charges of “moharebeh through membership in an opposition party.”

In a shocking case, a prisoner in Urmia was hanged while having been subjected to mock executions twice before. Also, three prisoners were executed in Rajai Shahr, who had previously spent 20 years in prison. One of them was 20 years old when he was arrested, and he had lost one eye during the riots inside the prison.

Iran Human Rights Monitor has published a detailed report on the executions carried out in Iranian prisons in March 2022.

The use of lethal force against ordinary citizens, including Kurdish porters and unarmed fuel carriers working in the border areas of Iran, is unjustifiable and is clear violation of international law. These killings violate the right to life enshrined in Article 6 of the International Covenant on Civil and Political Rights, to which Iran is a signatory. Iranian security forces carry out these killings without any legal consequences and with impunity.

Last month, state-run media announced that a man had been flogged in Mashhad. The detainee, accused of insulting Basij forces. Reports said that in this case, the judicial process took less than 24 hours, and he was sentenced to 80 lashes which was carried out in the Mashhad prison. Also, in a humiliating manner, eight defendants were taken to the streets in Isfahan. The men were publicly degraded for their activities related to the Chaharshanbe Suri, or Fire Festival, on the eve of the last Wednesday of the year before the Nowruz. State-run media said the men had been charged with assaulting police officers.

Violation of the right to freedom of assembly

At least 20 people including civil and labor activists were arrested by security forces on March 11, during a memorial ceremony for a poet writer Samad Shabani in Karaj.

In another example, according to the announcement of the “Iranian Teachers’ Trade Association (ITTA)”, security forces and plainclothes agents attacked a teachers’ protest rally in the northern Rudsar city in Gilan province on March 12, and severely beat the demonstrators. They arrested at least four teachers including Mahmoud Beheshti Langroudi, Mahmoud Sedighipour, Hassan Nazarian and Masoud Farhikhteh.

In its report on the rally, ITTA also announced that security forces had stopped vehicles carrying teachers who had come from other cities to the rally and had beaten the teachers.

Violation of the right to freedom of opinion and expression

Last month, the Iranian regime suppressed the right to freedom of expression and opinion. Various intellectuals, dissidents, journalists and even athletes were arrested or prosecuted for expressing their views and opposition to the regime’s policies.

Labor activist and financial reporter Amir-Abbas Azarmvand was arrested during a gathering on March 8 in Tehran and taken to prison to begin serving his sentence.  A court in Tehran sentenced him to three years and seven months in prison after convicting him of “spreading propaganda against the system.”

Azarmvand, who works for the state-run financial newspaper SMT, was also banned from leaving the country for two years. Azarmvand, was arrested in September 2021 over his reporting and held in Tehran’s Evin prison. He was later released on bail before his trial began on January 8. His sentence was handed down on January 19.

The Revolutionary Court of Tehran sentenced Hasti Amiri to one year in prison. Hasti Amiri is a master’s student of law at Allameh Tabatabaii University. She has been charged with propaganda activities against the state, for posting her last year’s photo on March 8 and for tweeting against the death penalty.

Security forces arrested Pardis Rabii on Friday, March 11, 2022, and transferred her to an unknown location, announced the student union councils.

Pardis Rabii, 23, is a genetics student and lives in Yazd. She is a women’s rights activist working on honor killings. She was busy compiling a complete encyclopedia on women who have fallen victim to tradition, sharia, and honor killings in Iran.

Rafsanjan copper team player Mahsa Kamali was summoned to the disciplinary committee for supporting the Ukrainian people and calling for an end to the war. During a contest on March 4, Ms. Kamali displayed a shirt with “Stop the War” written on it.

The Revolutionary Court of Bushehr sentenced journalist and political activist Hossein Rouintan, to 20 years in prison and paying fine for “acting against national security.” If the sentence is upheld on appeal, he will face up to 10 years in prison. The court cited the creation of a campaign in cyberspace and the invitation to an illegal gathering as examples of the charges against this citizen.

Political prisoners faced deprivations such as the right of access to adequate medical treatment, phone calls, visitations and leave.

Political prisoner Houshmand Alipour was deprived of the right to leave and visit his family. The judge in charge of Sanandaj prison said that Alipour had been deprived of family visits because the news about his hunger strike went published.

the reason for his deprivation was the media coverage of Mr. Alipour’s hunger strike.

Khosrow Sadeghi Boroujeni, a writer and journalist imprisoned in Evin Prison, was barred from making phone calls. Reports indicate that it came after he participated and made a speech in a Nowruz celebration.

Nayeb Hajizadeh, a Kurdish political prisoner, is in critical condition in Urmia Central Prison due to being denied access to adequate medical care. He fainted on March 10, due to a seizure, but prison officials refused to provide him with medical treatment.

Thyroid cancer of political prisoner Qassem Abasteh has recurred due to being denied adequate medical treatment. He is in critical conditions in Rajai Shahr Prison.

According to an informed source: “In the last 4 years, no medical examinations and sonography of his throat and thyroid area have been performed. Because of the cancer, he had to take these tests periodically, and doctors insisted on doing these tests, but the prison authorities prevented him from receiving any medical treatment.”