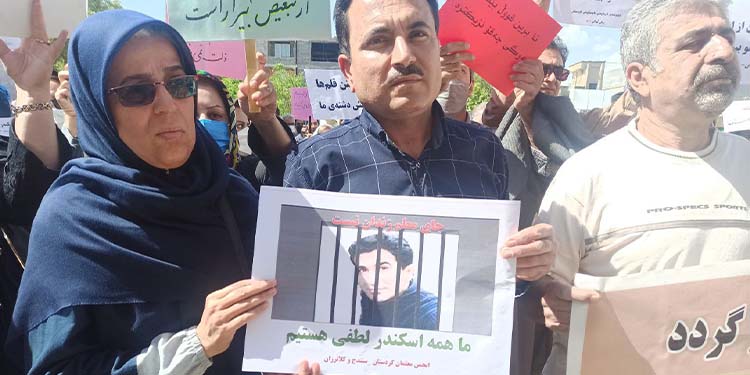 Dozens of teachers were arrested during the nationwide gathering of teachers in Iran and there was a heavy presence of security forces in Tehran and several other cities.

According to the Coordinating Council of the Iranian Cultural Teachers Associations, since the early hours of Thursday, May 12, security forces and plainclothes agents were stationed in Baharestan Street, near the Iranian Parliament building.

According to the council, two protesting teachers, Massoud Farhikhteh and Lotfollah Jamshidi, were arrested at the same time as the security forces prevented any gathering.

Social media reports said that Siamak Sadeghi Chehrazi, a well-known activist from Ahvaz, who was present at today’s rally on May 12, was severely beaten and arrested in front of the General Department of Education of Khuzestan.

The council also reported that security forces prevented teachers from gathering and arrested “more than 50 people.”

Teachers in Iran have been protesting again after Iran’s Minister of Education on Thursday, May 5, implicitly called the teachers’ protest rallies “illegal” and threatened to “expel” the participants.

Meanwhile, the Ministry of Intelligence announced on Wednesday that two nationals of a “European” country in Iran had been arrested on charges of attempting to create “unrest” and claimed that they were in contact with the Coordinating Council of the Iranian Cultural Teachers Associations.

Iranian teachers rallied today in various cities including Amol, Kermanshah, Marivan, and Sanandaj to demand the release of detained teachers and express their economic woes.

In most of these rallies, the teachers chanted slogans calling for the release of their detained colleagues.

In a statement on May 7, the Coordinating Council of the Iranian Cultural Teachers Associations announced that teachers would hold a nationwide rally on Thursday, May 12, if the detained teachers were not released.

The statement came at a time when at least 11 teachers and teachers’ union activists were in prison.

In a report on Monday, May 9, the Coordinating Council said that Rasoul Badaghi, Jafar Ebrahimi, Mohammad Habibi, and Ali Akbar Baghani, the detained teachers, had been “severely interrogated in recent days to accept non-union charges.”

Teachers have repeatedly staged large-scale protest rallies in dozens of cities over the past year.

They say that only after implementing this law and the real ranking plan and accurate adjustments should the salaries of every retired and employed teacher reach above the poverty line. The same is true for newly hired and informal teachers.

The end-of-service bonuses for retirees of 2021 and the arrears of casual teachers must be paid. Temporary teachers should also be formally employed.

While strongly supporting Iranian workers’ demands, Iranian educators and teachers also call for an end to the policy of repression and intimidation, the closure of labor activists’ cases, and the release of labor prisoners.