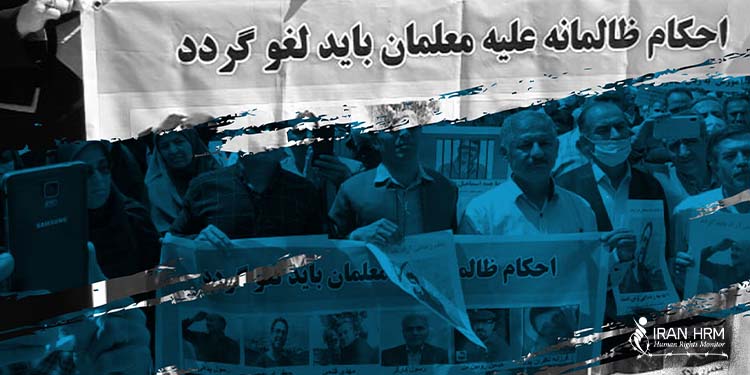 Iranian authorities have increased their pressure on activist teachers, summoning and arresting more than a dozen teachers for engaging in peaceful protests.

forces arrested, threatened, and summoned dozens of teachers and activists for engaging in peaceful protests

Ahead of May Day, which coincided with Teachers’ Day in Iran, the Iranian Teachers Trade Unions Coordination Council said authorities arrested at least four union activists in Tehran on April 30. Three other activists were reportedly arrested in the western city of Marivan, while a number were reportedly summoned in other cities.

On International Labor Day, May 1, 2022, Iranian educators and teachers rose up to demand the release of imprisoned teachers. They chanted the slogan, “Free the imprisoned teacher,” throughout Iran. The nationwide protest took place in 55 cities and 21 provinces of Iran.

In many cities, including Marivan, security forces were widely present in front of the education departments.

The Telegram channel of the Coordination Council of Iranian Teachers’ Associations reported that security forces in Bushehr attacked a peaceful gathering of teachers and arrested and beat a number of them.

Teachers have in recent months taken to the streets on several occasions to protest their conditions and demand higher wages. They have also called on the government to speed up the implementation of reforms that would see their salaries better reflect their experience and performance.

The Workers’ Free Union of Iran also announced that on the eve of International Workers’ Day, four teachers were summoned to the Sanandaj Intelligence Office. These teachers were interrogated about the nationwide rally on Sunday, May 1.

The rights group said that, since March, Iranian authorities have increased their harassment of active members of the Iranian Teachers Trade Association, which has been leading nationwide protests for fair wages for the past three years.

“Iranian labor activists have been at the forefront of the struggle for the rights to free association and assembly in Iran, and they have paid a heavy price from government repression,” Tara Sepehri Far, senior Iran researcher at Human Rights Watch, said in a statement on April 29.

“Iranian authorities should recognize the rights of labor unions and engage in meaningful efforts to address the country’s mounting economic problems,” she added.