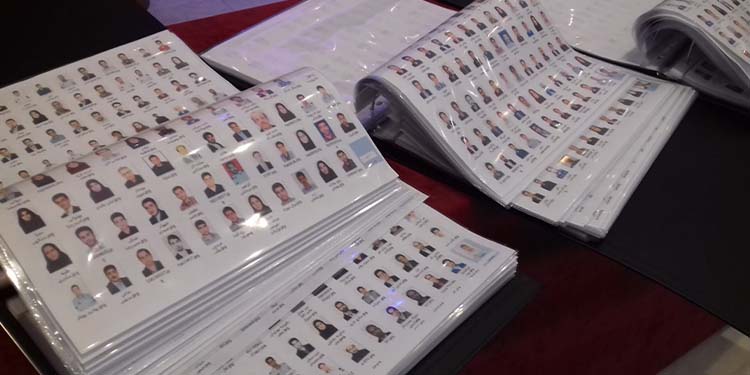 In a stunning revelation last Friday, the National Council of Resistance of Iran (NCRI) published the names and photographs of thousands of Iranian prison wardens, interrogators, intelligence agents, and other human rights violators.

Altogether the names and details of 33000 Iranian prison officials, wardens, interrogators, intelligence agents, and executioners were made public at a press conference in Paris on May 13. The treasure trove of info contains 22000 photos of personnel involved in human rights violations.

The collection of evidence includes secret photos obtained from inside Iran’s prisons across 23 provinces, revealing a shocking state of prison overcrowding.

It further includes the chain of command of Iran’s Prisons Organization and a list of 1,160 senior prison staff officials.

The classified documents unmasked by the NCRI include names of 2273 prisoners jailed for their political and religious beliefs and a Top Secret list of detained protesters. 210,423 detainees are held in 267 prisons run by Iran’s Prisons Organization, while the State Security Force and the Ministry of Intelligence run 159 and 147 other detention centers.

The Prisons Organization, which operates under the supervision of the Iranian judiciary, is one of the most notorious criminal agencies of the religious dictatorship ruling Iran and is directly involved in suppression, torture, and executions.

In a statement on May 13, the NCRI said that following the 68th United Nations General Assembly resolution censuring human rights abuses in Iran, Mr. Massoud Rajavi, Chairman of the council, instructed NCRI’s Security and Counterterrorism Committee to compile information and documents about the regime’s judiciary, particularly the facts about what goes on and has been going on in regime’s prisons so that they could be brought to the attention of the public, the UN, and other human rights organizations, so as to inform the world about the situation inside Iran.

The 68th United Nations General Assembly resolution censuring human rights abuses in Iran, adopted on December 16, 2021, expressed serious concern “at the alarmingly high frequency of the imposition and carrying-out of the death penalty,” “widespread and systematic use of arbitrary arrests and detentions,” “deliberately denying prisoners access to adequate medical treatment and supplies,” and “appalling acts committed by prison guards at Evin prison,” “harassment, intimidation, and persecution, including abductions, arrests, and executions, of political opponents, human rights defenders,” and “arbitrary arrest and detention, and torture and other cruel, inhuman or degrading treatment or punishment against peaceful protesters,” and “the use of torture to extract confessions, and cases of suspicious deaths in custody.”

Regarding the situation of prisons, Mrs. Maryam Rajavi, the President-elect of the NCRI, said on August 24, 2021: “Under the Iranian regime, prisons have no meaning other than torture chambers and dungeons.”

NCRI said that “The dossier on the horrific and systematic human rights violations in Iran, especially its conduct in prisons, must be referred to the UN Security Council. The leaders of the regime must be brought to justice for four decades of crimes against humanity.”