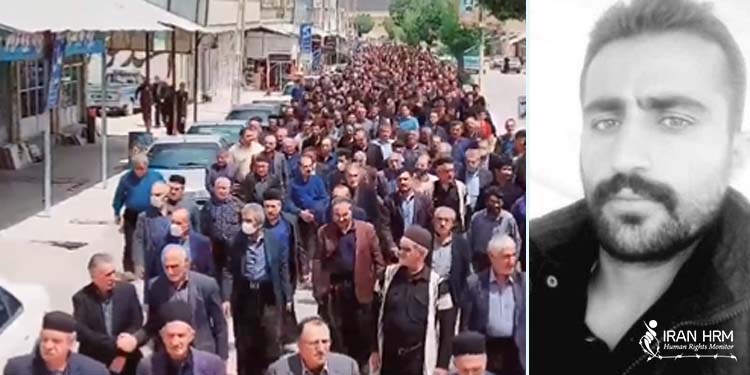 Thousands took part in the funeral for a slain protester on Tuesday in the city of Babaheydar.

Behrouz Eslami, a father of two small boys, was shot in the head by a Revolutionary Guard (IRGC) during the recent protests on May 15 in Babaheidar, in Chahar Mahal and Bakhtiari Province.

Security forces reportedly held his body for several days before finally allowing the family to bury their son.

The Iranian authorities ordered his family to carry out an immediate burial and prohibited them from holding any memorial services for their son.

He was reportedly shot when he stuck his head out of his house’s window to see the nearby protests in the city of Dezful, in Khuzestan Province.

He was laid to rest in a small village near Aligudarz in the western Lorestan Province.

Iranians have staged street protests after authorities cut subsidies for imported wheat, a move that has led to a dramatic increase in the price of bread.

Iranian authorities resorted to violence including through the unlawful use of teargas and gunfire to crush the protests.

According to various reports, the Ministry of Intelligence and Security (MOIS) has instructed the media to avoid reporting the protests and even using terms such as “economic surgery,” “violent response,” and “rallies.”