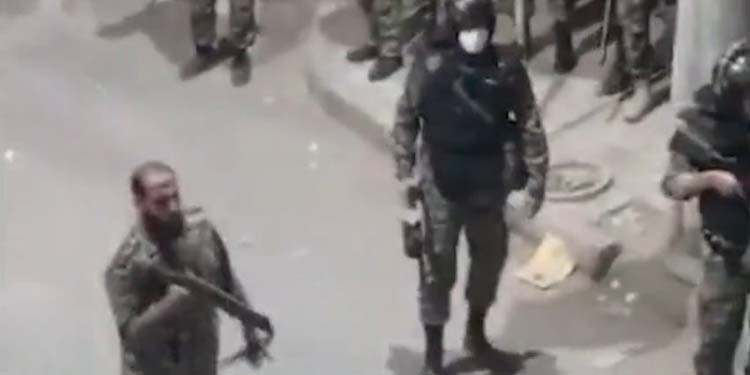 Protests in Abadan over the Metropol building collapse turned violent after the state security forces fired shots and attacked protesters with tear gas.

People in several cities across the provinces of Khuzestan, Hormozgan, and Isfahan took to the streets on Friday for the third night, holding protests in solidarity with the people of Abadan following Monday’s collapse of the city’s ten-story Metropol tower.

Chants by demonstrators heard during the protests included: “Death to the dictator!” in reference to regime Supreme Leader Ali Khamenei, “Our enemy is right here! They lie in saying its America!” “All these years of crimes! Death to this velayat!” also targeting Khamenei, “Not Gaza! Not Lebanon! My life for Abadan!” “Let go of Syria! Think about us!”

There were also reports that special forces fired tear gas and live ammunition at protesters. The number of injured or detained during Friday night’s protests is still unknown.

In its report from Abadan, Fars news agency, an outlet linked to the Revolutionary Guards (IRGC) said that security forces resorted to violence because of “the population’s insistence on entering the area of the collapsed Metropol Tower.”

This is while locals have been taking matters into their own hands from the very moment the Metropol tower collapsed. Everyone says authorities have done next to nothing. According to videos shared on social media and on the ground reports, having received no aid from the authorities, volunteers tried to rescue possible survivors with their bare hands. Locals also used their own home-trained dogs to find survivors in the collapsed Metropol tower rubble.

From the very first day of the Metropol building collapse, authorities dispatched a large number of anti-riot units to the area, to counter possible protests by furious locals.

Reports showed authorities disrupting internet access in many cities to prevent the further distribution of reports regarding these protests and in the prelude to their crackdown measures.

On Wednesday night, May 25, a massive crowd of locals in Abadan, southwest Iran, took to the streets in protests triggered by the Metropol building collapse on Monday, May 23.

Angry protesters were chanting slogans against the regime, local officials, and the corrupt contractor responsible for the faulty construction project that led to the tower crumbling down, leaving at least 28 people killed, many more injured, and dozens still feared missing. State media is reporting dozens of those injured have been dispatched and recovering in their homes now.

Wednesday night saw protesters chanting slogans specifically targeting senior regime and local Abadan and Khuzestan province officials for their destructive policies and corruption that led to the disaster, and recent incompetence in providing necessary aid during the rescue effort.