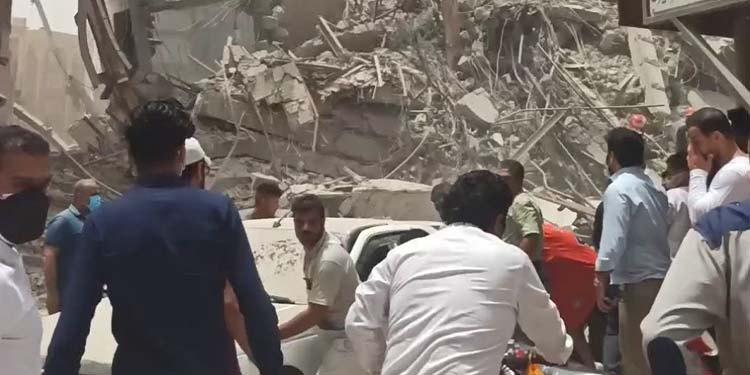 A large section of the 10-story Metropol building that was under construction in the city of Abadan, Khuzestan province, crashed to the ground on Monday, May 23, leaving dozens killed, injured, or missing.

The death toll from the Metropol building collapse rose to 28 on Saturday, according to the state media, making it the country’s deadliest such disaster in years.

Reports also indicate more than 30 vehicles have been buried under the massive rubble.

For a few hours after the Metropol building collapse authorities did not take any action, such as dispatching necessary heavy machinery, to assist in the rescue efforts and save people’s lives.

Videos shared on social media showed people pulling out victims and survivors from under the rubble with their bare hands.

Authorities have yet failed to take adequate measures.

While the people were trying to save the lives of those trapped under the rubble of the Metropol building, in the very first hours, authorities dispatched special units to the streets of Abadan to prevent the people from protesting.

In a previous disaster in Iran, 22 people, including 16 firefighters, died in a blaze that engulfed the capital’s 15-story Plasco shopping center in January 2017.

Why did Metropol building collapse?

An ad posted by the holding company that built this building boasted: “A hardened concrete structure that is built earthquake-proof!”

However, the Metropol building collapse took the lives of many long before any earthquake.

Why does the newly constructed building collapse?

State media acknowledged that a year ago, experts had warned of the possibility of the Metropolis building collapsing due to weak structures, but regime officials ignored the warnings.

“From months ago there were reports of the building’s main column sinking and the ceilings of various floors sagging,” according to a report posted on the state-run Khabar Online website on May 24.

The report says “the [Abadan] municipality’s failure to follow up on construction violations” led to Monday’s tragedy.

In an interview with the state-run Young Journalist Club Hamzeh Shakib, head of the State Construction Engineering Organization, said on May 26, that Abadan municipality had issued a construction permit for the Metropol building without informing the Organization.

Hamzeh Shakib adds that the organization had warned the owner and the municipality about the violations in this tower, and the governor’s office and the judiciary were also aware of this warning.

Khuzestan Governor Sadegh Khalilian also said in this regard: “Initially, a permit for the construction of a six-story building was issued, but over time, three floors and two floors were added to it in two turns.”

Khalilian added that the Metropol building was not fully built, and construction was ongoing.

Based on documents published on social media, there have been several warnings about the construction of the Metropol building, the last of which dates to a month ago.

Iranian people are blaming the regime’s mismanagement and corruption for the Metropol building collapse.

Hossein Hamidpour, the regime’s mayor in Abadan, went to the scene a few hours after the Metropol building collapsed. However, locals attacked him and forced him to flee the area, according to a report wired by the state-run ILNA news agency.

People say this corrupt figure authorized the construction of the Metropol twin towers despite many technical deficiencies in the plans.

Following the ceasefire that brought an end to the 1980s Iran-Iraq war, former regime Supreme Leader Ruhollah Khomeini and his successor, Ali Khamenei, has been busy involving the Revolutionary Guards (IRGC) in the country’s economy, meaning plundering the Iranian people’s God-given resources and riches. From 1988 to this day the IRGC has become the largest holding company and Khamenei’s personal mafia, establishing firm control over all of Iran’s economy and industries, including the road and construction sector.

Back in 1992, a holding was founded under the name of Hossein Abdolbaghi, who was in connection with the IRGC and began working on various construction projects. Out of nowhere, this newly established company became a massive holding firm with “300 permanent employees and hundreds of contract workers,” according to the holding’s documents.

A report posted on the state-run Fidous website on August 3, 2020, reads: “The formula behind Abdolbaghi becoming rich is smart management and establishing relations” with state entities, “along with rent opportunities” and “forming ties with political and administrative figures” in the regime.

Numerous reports on Tuesday, May 24, wired by the regime’s various news agencies claiming Abdolbaghi’s dead body has been found in Metropol’s rubbles. It came after reports of the Khuzestan province prosecutor filing documents for his arrest.

These contradictory remarks have only raised all the more suspicion among Abadan locals, especially considering the regime’s long history of lie after lie.

Many people in Khuzestan have rejected claims made by Abadan officials and state media about the fate of Hossein Abdolbaghi, the corrupt contractor and CEO of the company behind the Metropol tower construction. people believe that he is alive and has left the country.