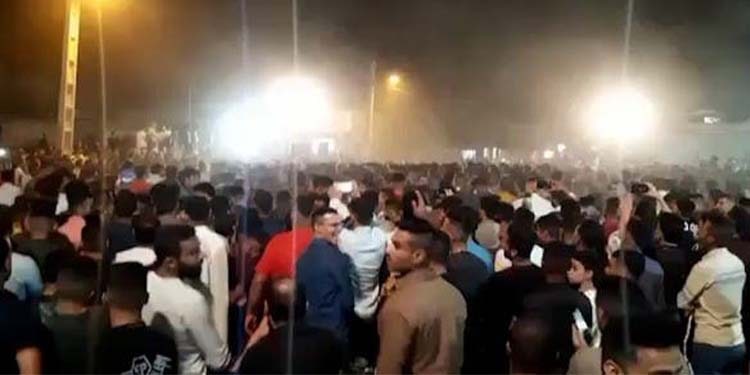 Iranian riot police fired tear gas and shot into the air to disperse an angry crowd of hundreds of people near the site of a building collapse in the southwestern city of Abadan, online videos showed Monday.

One week after the collapse of the Metropol Tower, which left dozens dead and missing, Abadan was once again the scene of protests on the evening of Monday, May 30. The protests, however, were met with violence by security forces.

Rescue teams at the site of the tower pulled more bodies from the rubble on Monday, bringing the death toll in the disaster to 34.

A spokesman for the accident at the Metropol building in Abadan on Tuesday, June 1, said: “With the body of another citizen of Abadan found under the rubble, the death toll from Metropol collapse reached 34.”

Activists in the cities of Abadan, Shadegan, and Izeh in Khuzestan province, Bushehr in Hormozgan province, Tehran, Zavareh in Isfahan province, and Kazerun in Fars province reported people taking to the streets on Monday in solidarity the people of Abadan.

Protesters chanted “Our enemy is right here! They’re lying that it’s the US” and “death to the dictator” referring to the regime’s Supreme Leader, Ali Khamenei.

Earlier on Monday, a gathering of soccer fans in Tehran’s Azadi Stadium celebrating their team’s victory in the Iranian football league began chanting “Abadan! Abadan!” in sympathy with the people of the southwest Iranian city. A southern district of the capital was also the scene of regime security forces attacking locals holding a gathering. Locals were also seen chanting: “Death to Khamenei!”.

Reports from Khuzestan and other provinces indicate authorities are heavily disrupting internet access. In Tehran, authorities dispatched anti-riot units to the city theater to prevent locals from even holding a vigil in solidarity with the people of Abadan.

Security forces in Abadan forced stores to close, arresting their owners and transferring them to unknown locations.

Iranians blame the regime officials’ negligence and corruption for the collapse of the Metropol building.

Authorities acknowledge the building’s owner and corrupt government officials allowed construction to continue at the Metropol Building despite concerns over its shoddy workmanship.

The building collapsed on Monday. Authorities have arrested 13 people as part of a broad investigation into the disaster, including the city’s mayor.

Half of wetlands in Iran devastated by officials’ mismanagement