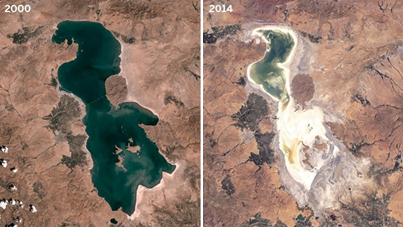 The state security forces have arrested at least 16 people at protests over the drying up of Lake Urmia which was once the world’s second largest salt lake.

Reports say dozens have also been summoned by the authorities.

Rahim Jahanbakhsh, the police chief of Iran’s West Azerbaijan Province, said on July 17 that several people had been arrested for disturbing security. He described the protesters as “many evil and hostile elements, who had no other objective than to destroy public property and disturb the security of the population,” according to the state-run IRNA news agency.

On July 16, the state-run Fars news agency reported that “dozens of people in the cities of Naghadeh and Urmia had protested against the authorities’ lack of attention to the drying-up of Lake Urmia.”

Fars said demonstrators had shouted slogans in the provincial capital of Urmia, warning the lake was shrinking.

“Lake Urmia is dying, parliament orders its killing”, some shouted, Fars reported, with others calling out that “Lake Urmia is thirsty.”

Lake Urmia in northwestern Iran is 140 km from north to south and 80 km from east to west, and with a total area of 5,200 square kilometers, it was the largest saltwater lake in the world after the Caspian Sea until the last two decades.

It began shrinking in 1995 due to a combination of prolonged drought and the extraction of water for farming and dams, according to the UN Environment Program.

Activists blame authorities’ mismanagement and negligence for the disappearance of Urmia lake.

The construction of 35 dams on 21 rivers feeding Lake Urmia has played an important role in the drying up of the once flourishing lake. Currently, nearly 50 billion cubic meters of water have been taken from Lake Urmia with the construction of the above-mentioned dams, which have dried up about three thousand square kilometers. Regime authorities have planned the death of the lake by indiscriminately building numerous dams and deep wells, creating a bypass road on the lake, and polluting it with industrial wastes.

Amir Abbas Jafari, the Director General of Crisis Management of West Azarbaijan Province, said recently that 95% of the water in Lake Urmia had dried up and said that this was unprecedented in the last two decades and that the height of this lake has decreased by an average of 40 cm every year. Jafari said the most important factors behind the death of Lake Urmia were drought, excessive development of agriculture, and the improper use of lake water for growing crops that need a lot of water. He expressed hope that proper cultivation and proper use of water resources in the region would lead to the revival of the lake.