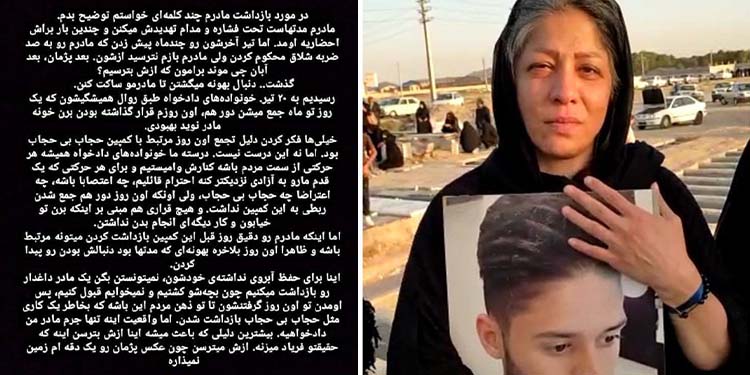 Iranian authorities have sentenced Mahboubeh Ramezani, the bereaved mother of slain protester Pejman Gholipour to 100 lashes for seeking justice for her son.

Peyman Qolipour said, “My mother was under pressure for a long time. They constantly intimidated her, and she had been summoned several times. They condemned her to 100 lashes a few months ago, but that did not scare my mother. What do we have to lose after Pejman? What is left after November 2019? They were looking for an excuse to silence my mother. On July 11, the justice-seeking families were supposed to gather for their monthly reunion in the residence of Navid Behboudi’s mother,” Peyman Gholipour wrote.

“The fact is that my mother’s only crime was seeking justice. They are so afraid of her because she cries out the truth. They fear her because she has not even put down Pejman’s photo for a moment,” he said.

Mahboubeh Ramezani, and several other mothers and relatives of victims of the crackdown on the November 2019 protests were arrested on July 11, 2022.

She is currently held in the notorious Evin Prison.

Mahboubeh Ramezani, is the mother of 18-year-old Pejman Gholipour who was killed by five bullets fired by security forces during the November 2019 protests Andisheh, Tehran province.

She has been repeatedly targeted for harassment and intimidation in reprisal for her public calls for justice and accountability for her son’s death. On November 18, 2021, security forces arrested and temporarily detained her in relation to a commemoration event in the village of Malat, Gilan province, where her son is buried, to mark the second anniversary of his death. On the day of the memorial, security forces descended onto the village in large numbers, closed the roads in and out of the village, arrested a number of relatives and mourners, and confiscated their mobile phones. Mahboubeh Ramezani and several other family members were also briefly detained.

In April 2022 Mahboubeh Ramezani, explained in an article: “After several times that (the security services) called my husband and I, but we did not respond, they called my son. They told him to be careful. ‘If your family continues to do what they are doing, worse incidents will await them.’ My son told them, ‘My parents seek justice for their son.’ (The security services) replied, ‘Their son was an offender, and we killed him! Tell your parents to come here, or we will come and transfer them to jail.”