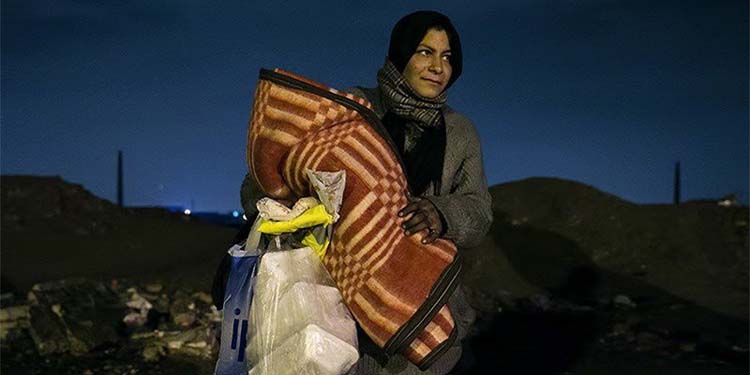 The multifold increase in prices, unemployment, and the exponential growth of rent, along with social problems such as addiction, has aggravated the risk of families becoming homeless.

Ali Heidari, the Director of Iran’s Ending Homelessness Institute, warned that the phenomenon of homelessness has a direct relationship with the economic situation of families.

“We are moving from the phenomenon of homeless people to a more dangerous phenomenon called homeless families.”

According to the director of the Ending Homelessness Institute, if the country’s economic situation does not improve, soon homeless families will become widespread in Iran, because in the current situation, middle-class families have moved to the outskirts of cities, and the families who lived in the slums have no place to go and are forced to live on the streets in tents or on boxes.

In his interview with the state-run ROKNA news agency, Heidari confirmed that about 85% of the people who sleep on boxes on the streets are drug addicts.

“However, if the current situation continues, we will soon see a group that is neither addicted nor without a family, but rather whole families who live in tents on the sides of the streets and this should raise alarm bells for society and the people,” he added.

According to the Director of the Ending Homelessness Institute, many homeless people migrate to southern cities in the cold seasons and return to Tehran when the weather warms up. For this reason, the southern city of Bandar Abbas has a high number of homeless people.

Ali Heidari expressed regret that the population of educated homeless people was also increasing and said: “According to our statistics, 30% of homeless people have diplomas or higher, and among them, there are also people with doctoral degrees.”

According to Heidari, about 20% of the homeless are women and children. He criticized the welfare organization, municipalities, and the state-run radio and television organization for not fulfilling their duties, and said instead of fulfilling its duties, the Welfare Organization was only looking to rent out its properties.

“Municipalities have built only a limited number of shelters that provide very limited services.”

The official institutions in the Islamic Republic of Iran do not have accurate statistics on the homeless, and if they do, they hide it. However, Iran’s media have mentioned different statistics. In January, after the phenomenon of bus sleeping made headlines in Tehran, the state-run Danjeshju News Agency quoted city officials and wrote that 24,000 homeless people lived in the capital. The report said most of these people lived in district 12 and the outskirts of Tehran.

To understand the magnitude of this catastrophe, it is enough to consider the capacity of the capital’s shelters which can only accommodate 2,800 people a day. Ali Hiydari estimates that there are about 35,000 homeless people in the capital.

Last winter, Iranian media revealed that some working people spend the cold winter nights sleeping in city busses. Reports of people sleeping on roofs and in graves also made headlines. In all these cases, the authorities of the Islamic Republic of Iran denied the magnitude of the reports and claimed they had taken effective measures to support needy people.

Previously, Sepideh Alizadeh, a civil activist in the field of addiction and women, said that along with the spread of poverty, family visits to homeless shelters had also increased. According to Alizadeh, these people are not addicts but they have become homeless and since it is not possible to accept whole families in the shelters due to gender segregation, women and children are accepted in women’s shelters and men in men’s shelters.