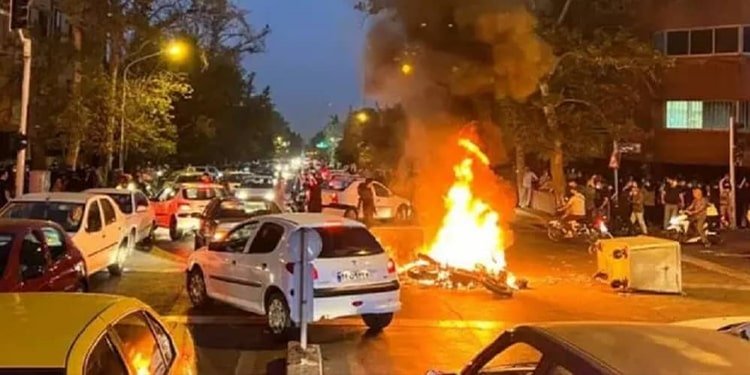 Eight men and one woman died in clashes with security forces

Wounded protesters in Eslamabad-e Gharb were snatched from hospital beds and taken to prison. Their families are under pressure from the Intelligence Ministry. Other injured protesters remain in people’s homes and receive care with minimal equipment.

Reports from the eve of September 22, 2022, indicate that the regime brought IRGC retirees, armed forces, and Bassij members from villages to clamp down on demonstrators. They shot directly at people with shotguns, killing numerous people and wounding many others.

On the same night, eight men and one woman, shot and killed by security forces, were transferred to the mortuary of Eslamabad-e Gharb.

Large numbers of people have been injured. Some of the wounded protesters were rushed to the hospital’s operating room due to severe injuries. Other casualties were waiting on hospital beds to be sent to Kermanshah.

A young man named Mohsen Ghanbari was seriously wounded in the face and chest by a shotgun. Locals quickly took him to hospital. Right after the bullets were removed and he was operated to have a plating, Mohsen was taken to the Intelligence Department. After several hours in custody, Mohsen was secretly transferred to Kermanshah’s Dizelabad Prison on a hospital bed.

Iman Mohammadi is another slain victim in Eslamabad-e Gharb. His body has not yet been given to his family. The security forces are demanding a large amount of money from Iman’s family to deliver his body.

The victims’ families are under great pressure from the Intelligence Department to prevent them from holding funerals or publishing funeral invites.

A video shows how a teenage boy was shot in the head from behind and killed. His name and other personal information are not available.

Many of the injured do not go to the hospital for treatment to avoid being arrested. They would instead be treated at home. People used elementary tools like tweezers and blades to remove pellets from the body of the wounded protesters.