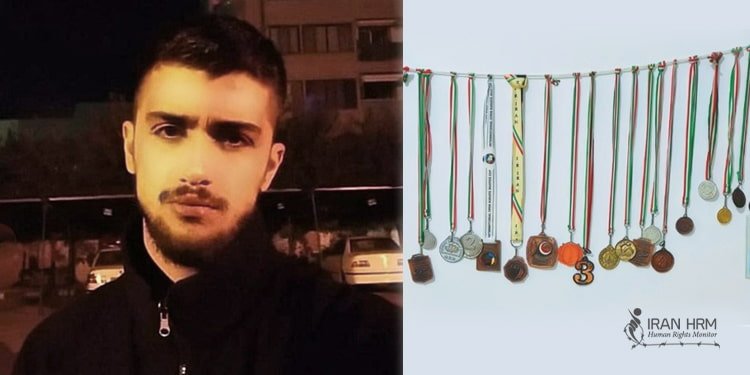 Mohammad Mehdi Karami, 22, is a Karate champion and has several championship medals. Mohammad Mehdi Karami has been identified by Iran’s Judiciary as the front-row defendant in the case of Ruhollah Ajmian, a Basij Force member who was killed during the protests. He was found dead on November 3, 2022, in Karaj, during a ceremony commemorating the 40th day after state security forces killed Hadis Najafi.
Mr. Karami was arrested by security forces on November 5, 2022, and beaten so hard he fell unconscious to the ground. Government forces thought he was dead and threw his “body” outside the Nazarabad Court. But as they were leaving, they realized he was still alive. After taking him back inside, they broke his rib under torture and injured his hands and head.

Mr. Karami received no medical care for the sufferings. Mohammad Mehdi Karami informed of the government forces threatening to sexually harass him during his detention time. He said, “they threaten to rape me every day.” Mohammad Mehdi Karami was tried on November 30, 2022, and sitting on his left and right side were two individuals. He was made to say what was given to him on a paper by the individuals. Mohammad Mehdi Karami was identified in court as the front-row defendant and sentenced to death on charges of “Corruption on Earth” by committing crimes against national security. He was also charged with attacking a Basij member, assembly and collusion against national security, and posting action calls to strike against the state on cyberspace.

Mashallah Karami, Mohammad Mehdi Karami’s father, told a news agency in Tehran that his son’s “public defender” had not answered any of their calls in the past week. The lawyer had refused to even give his office address. Mashallah Karami’s said that the Judiciary informed him about being able to appoint a lawyer. But after introducing Mohammad Hossein Aghasi, the Judicial authorities did not grant Mr. Aghasi access to the case.

Mashallah Karami, a vendor, said that the person in charge of his son’s case had told him, would it satisfy you if I were to question the judgment of God and the Prophet? This was his respond to Mashallah Karami, after he requested for a sentence other than the death penalty to be given to his son.Mashallah Karami says his son denied committing any crime and told him, believe me dad, I swear to God, I did not do any of it. Mehdi Karami swore to his father’s calloused hands but added that in order to be sentenced to death, there is no need for evidence or document. They only need you to confess. Mehdi Karami asks, should they not be investigating the details?

Mashallah Karami says his son informed him in a phone call that he had received the death sentence from Judicial authorities in prison on Wednesday, December 7, 2022.In an interview with a daily in Tehran, Mashallah Karami said, he called us and said, dad, they have given us the sentences. I have been sentenced to death. My son cried and said, don’t tell Mom anything. Mashallah Karami is a vendor in Nazarabad, Alborz Province. He sells paper towels and has two children. One is Mohammad Mehdi and the other child disabled and remains at home. Mashallah Karami says his wife is very attached to Mehdi. He says my son is an athlete and always tried to earn honor. If something happens to Mehdi, our lives will end too. I have raised him with hard labor.

According to Mashallah Karami, his son has not accepted his charges and has been sentenced to death upon forced “confession.” Confessions that are made under physical and psychological pressure.Human Rights Monitor has warned repeatedly during recent weeks that detained protesters in Iran are under pressure and torture to make forced confessions against themselves. These detainees are denied access to a lawyer of their choice. Given these circumstances, the proceedings are “unfair,” and the sentences handed down to them are “illegal.”

On Tuesday, December 13, 2022, several German lawmakers assumed political support for young Iranian detainees at risk of execution. Helge Limburg, Member of the German Bundestag announced that he has taken over political sponsorship of Mohammad Mehdi Karami. In a tweet, he describes the possible execution of Mohammad Mehdi Karami by the regime in Iran to be a Judicial killing.