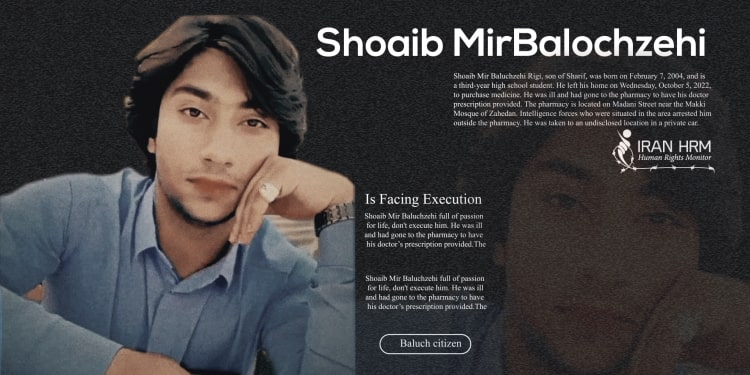 Shoaib Mir Baluchzehi Rigi is an 18-year-old Baluch citizen from Zahedan. He was arrested during the nationwide protests, on October 5, 2022, and since the Iranian Judiciary sentenced him to Moharebeh (War on God) he is at risk of execution.
Shoaib Mir Baluchzehi Rigi, son of Sharif, was born on February 7, 2004, and is a junior high school student. He left his home on Wednesday, October 5, 2022, to purchase medicine. He was ill and had gone to the pharmacy to have his doctor’s prescription provided. The pharmacy is located on Madani Street near the Makki Mosque of Zahedan. Intelligence forces situated in the area arrested him outside the pharmacy. He was taken to an undisclosed location in a private car.
Eyewitnesses say that officials approached him outside the pharmacy like they have done with others after Zahedan’s Bloody Friday. They stopped and questioned him as well, checked his cell phone and found videos of the protests and on the same pretext have kept him detained and charged with “Corruption on Earth.”
Shoaib’s father died years ago when he was a kid and his mother was his guardian. Shoaib is the eldest child of the family and helps his mother. Videos of Shoaib singing and dancing are posted on social media. Shoaib loved to travel, just like hundreds of other teenagers who were arrested or killed during recent protests in Iran.

Shoaib Mir Baluchzehi Rigi was charged with “Corruption on Earth” for having videos of the protests. They charged him with being a protest leader. He was forced to sign documents under torture that became the basis for being sentenced to Moharebeh. Shoaib’s eyes were covered at all times during interrogations, even when they forced him to sign the papers, he had not been able to read them.

Zahedan’s Shahid Nouri Criminal Court, located on Behdasht Boulevard, held a hearing for Shoaib Mir Baluchzehi Rigi on December 19, 2022, and issued him a death sentence. He was denied the right to an attorney and sat only one trial while blindfolded. According to haalvsh.org, “His family had not been informed of the trial and was not allowed to appoint an attorney to explain the proceedings to them. The court only held one trial and brought Shoaib from prison and sentenced him to death on charges of corruption on earth.”
Shoaib’s death sentence was announced to him in Zahedan Prison and since then his contact with family have been cut off and they do not know of his condition.
Shoaib was severely tortured for 14 days at Zahedan’s Intelligence Department. Torture marks are still clear on his body even after a month. He was forced to make false confessions under torture.
Intelligence officials told Shoaib’s mother, “Your child is guilty of a political crime, and you have no right to come here.”
To pressure his family, security forces also contacted Shoaib’s younger brother, who is under 18, and wanted him to come to the Intelligence Office. The court gave Shoaib’s family 20 days to make an appeal.

Condition of the detainee

According to haalvsh.org, “Shoaib, who was tortured and sentenced to death, was again tortured for two days in Ward 9 of Zahedan’s Central Prison in early January for forced confessions.” According to the report, security forces tortured the Baluch teenager by stripping him and making him stand in front of the cooler in winter. They told Shoaib that if he confesses to being a protest leader and in cooperation with armed Baluch groups, they will decrease his death sentence.

Since October 2022, following mass protests by people in Sistan and Baluchestan Province, many have been detained for no reason and contrary to legal procedures. This includes children under the age of 18, and the fate of many remains unknown.

After peaceful gatherings by the citizens over Chabahar police chief’s rape of a little girl, Maho Baluch, more than hundreds of Baluch protesters were killed and more than 400 injured by gunfire on the bloody Friday of Zahedan and Khash. Also, hundreds of Baluch citizens have been arrested since the protests began.