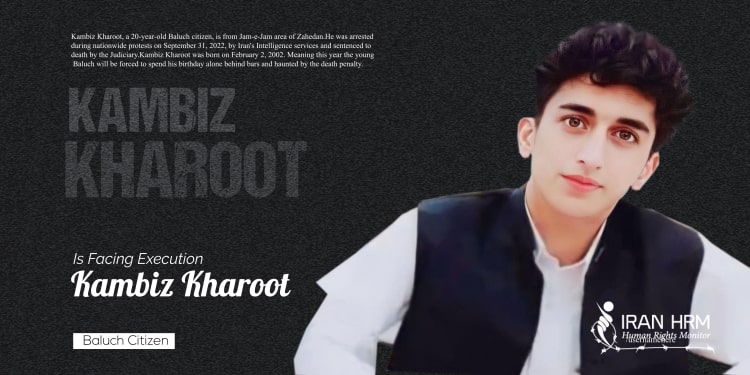 Kambiz Kharoot, a 20-year-old Baluch citizen, is from Jam-e-Jam area of Zahedan. He was arrested during nationwide protests on September 31, 2022, by Iran’s Intelligence services and sentenced to death by the Judiciary.
Kambiz Kharoot was born on February 2, 2002. This year the young Baluch will be forced to spend his birthday alone behind bars and haunted by the death penalty. Kambiz Kharoot was arrested in his shop in Karimabad area of Zahedan. All charges against him have been obtained under torture and are not reputable.

Kambiz Kharoot was arrested for the first time on September 31, 2022, and released on bail in early November. He was again arrested on November 12, 2022, and has been sentenced to death by Branch 2 of Zahedan’s Shahid Nouri Criminal Court, located on Behdasht Boulevard. He has been charged with “Incitement and chaos, through Moharebeh and Corruption on Earth.” The court sentenced him to death based on allegation that he set fire to the bank. According to civil activists, the banks was set on fire by plainclothes agents and Kambiz Kharoot’s shop was simply next to the bank.

On January 3, 2023, Kambiz Kharoot, son of Mehrollah, was sentenced to death by the criminal court. According to Balochcampaign.us, although Kambiz had firmly rejected all the charges against him in court, the prosecutor of Zahedan, Shamsabadi, had requested the death sentence for him. Thereby, the Judge never took Kambiz’s defense into account.
After the death sentence was announced, the Baluch defendant was given 20 days to make an appeal. Mr. Kharoot was never given the chance to appoint a lawyer and had not been represented properly. The public defender in the case took no legal measures for his client, not in court nor before the trial.

Kambiz Kharoot was subjected to severe torture at the Intelligence Detention Center. He is currently in Ward 9 of Zahedan Central Prison and calls and visits are prohibited. Sources familiar with the investigation said that the Baluch youth was severely tortured during interrogations and in detention. According to people close to him, he was unable to stand due to electric shocks and beatings. Cable lashes have left his entire back in critical condition.
According to the report, interrogators eventually forced him to sign a paper of the charges and scenarios they had written for him. The court sentenced him to Moharebeh based on the same forced confession obtained under torture.

Anneleen Van Bossuyt, a Belgian Member of the European Parliament, has accepted to be the 20-year-old’s political godmother. She tweeted, I’ll be political godmother of Kambiz Khorvat, 20. He was arrested 4 months ago by the IRGC, and was charged with “war with god and corruption on earth” which means as much as the death penalty. Sentenced to death based on confessions by torture and whipping. Be his voice!

Other young Baluchi citizens have been sentenced to death by Iran for participating in protests. Shoaib Mirbaluchzehi Rigi, 18, Mansour Dehmordeh, with physical disabilities, and Ebrahim Narouei, were detained in Zahedan protests.

Since protests began in September 2022, in Sistan and Baluchestan Province, many citizens have been arrested, including juveniles, who are taken away for no reason and contrary to legal procedures. The fate of many remains unknown. The Revolutionary Guards-IRGC, Iran’s Ministry of Intelligence, and the State Security Forces’ Headquarters have recently raided various neighborhoods in Zahedan and arrested at least 113 people.