The most noticeable development in January was the regime’s crackdown on Iran protests which started from Mashhad, the second largest city of Iran in the North East. The people took to the streets protesting against skyrocketing prices while the general public’s purchasing power is next to nothing.

Iran Human Rights Monitor published a special report on violations of the rights of Iran protesters. This bulletin just supplements it.

In addition to the arrest of more than 8,000 people and the killing of at least 50 during the nationwide protests, other systematic violations of human rights continued in January.

This bulletin makes brief references to rights abuses including the amputation of a thief’s hand, 13 executions, crackdown on minorities particularly Dervishes, continuing arbitrary arrests and ill-treatment of political prisoners.

The regime started crackdown on unarmed protesters from the very beginning of the demonstrations, by firing teargas and using water cannons.

Some 8,000 protesters were arrested and at least 50 were shot dead or killed under torture by the State Security Force as anti-government demonstrations erupted in 142 cities.

In the following days plainclothes and intelligence agents went door to door to homes and stores, arresting people on a daily basis. They have tortured the detainees to the brink of death, reports indicate. In some cases, the young people were put in a refrigerator or a freezer room to make confessions, reports indicate.

Commenting on the deaths under torture, Iranian regime claims the detainees committed suicide or they were drug addicts.

Some of the slain protesters were covertly buried while some others’ bodies were abandoned in front of their homes or found in rivers.

Mahmoud Sadeghi, an outspoken MP who has scrutinized the authorities’ conduct of the crackdown, has said that around 3,700 people were arrested in the recent unrest (protests).

According to a classified report obtained from inside Iran, 35% of those arrested during the uprising of the Iranian people are students. Earlier, IRGC brigadier Hossein Zolfaghari, security deputy Minister of Interior, announced that more than 90% of the detainees are juveniles and teenagers with an average age of under 25.

The families of the detainees staged protest rallies outside various prisons including Evin and Ahwaz prisons. The prison authorities not only did not respond to them, but fired tear gas and air shots, attempting to disperse the families who sought the release of their loved ones. At least 12 protesters have been so far tortured to death. Iranian officials however claim that they committed suicide or lost their lives due to drug addiction.

A series of tweets by Mahmoud Sadeghi, an outspoken MP who has scrutinised the authorities’ conduct of the crackdown since the protests have been a rare source of information from within the country.

“According to the relatives of one of the detainees who died in jail, he had told his family during a phone conversation [prior to his death] that the authorities had forced him and other prisoners to take pills that made them sick,”  Sadeghi tweeted on Tuesday. Further instances about violation of human rights of Iran protesters

Iran Human Rights Monitor registered 17 executions during January, including one in public and 5 covertly hangings. Two young men Amirhossein Pourjafar, 18, and Ali Kazemi, 22, and a young woman, Mahboubeh Mofidi, 21, who were under the age of 18 at the time of their crimes, are among those executed.

UN human rights experts in a statement appealed to Iran to halt the execution of Amirhossein Pourjafar, who was sentenced to death when he was 16 years old. “International standards unequivocally forbid imposing the death sentence on anyone under 18 years of age,” the statement reads in part.

Iranian teenager Abolfazl Chezani Sharahi remains at risk of execution after his execution scheduled for 17 January was postponed. He was 14 years old at the time of the crime of which he was convicted. Since 2014, he has been subjected to the anguish of being transferred to solitary confinement in preparation for his execution four times.

Two political prisoners, Zaniar and Loghman Moradi has also remained at risk of Imminent executions. Zaniar and Loghman Moradi were sentenced to death nine years ago for being members of Kurdish parties, the accusations which have been denied by the two. According to reports they are considered hostages of the Ministry of Intelligence to force Zaniar’s father to hand himself in.

In addition to the arrest of at least 8,000 people during the nationwide demonstrations, Iranian regime has made more arrests based on religious, ethnic or social grounds. Hundreds of arbitrary arrests were also reported.

Several months after the transfer of political prisoners in Rajaei Shahr Prison of Karaj to a maximum-security ward equipped with surveillance cameras, they are deprived of heating system, fresh air and adequate medical care.  The official shop in prison has recently added blankets to its selling items. However, according to an order issued by the head of prison, blankets will not be sold to political prisoners. Notably, political prisoners have currently launched a strike by refusing prison food ration, protesting the inhuman conditions they have been forced to endure at the ward.  They have announced that they will continue their strike until their demands are met.

They are held in cells with windows covered by metal sheets, and deprived of access to clean drinking water, food and sufficient beds. They are also barred from having in-person family visits and denied access to telephones, which are usually available in other parts of the prison. According to reports the prisoners in wards 2 and 6 haven’t had hot water for more than 50 days.

The prison is overcrowded with some wards holding two or three folds more than the maximum limit.

According to the warden’s admissions the problem is especially acute in the wards 1, 4 and 15 where the inmates are being forced to sleep on the floor, corridors next to the lavatories and even on the stairs, as overcrowding grows increasingly severe. In some wards which originally designed and built for 120, more than 450 individuals are held, prisoner’s families say. In a ward known as “psychotherapy” 180 prisoners are held in space meant for 100 people.

In reaction to the inmates’ repeated objections, the prison’s observing judge told them “The rules here are different from all other prisons and we have our own rules.”

A number of Dervish Gonabadi community members staged a rally, protesting the detention of other Dervishes across Iran which responded violently by the State Security Force as they beat and wounded them using batons, electric shockers and tear gas. The SSF also arrested a number of the protesters including Zabihollah Kordpour, Abdollah Rezaeian and Mohsen Azadifar. A pregnant woman, Raheleh Merrikh, was among those wounded because of the beatings. Some other injured protesters are Nourollah Golshan, Nasrollah Golshan, Kheirollah Karami, Gholam Azadi, Ahmad Dehghan, Amin Nadoumi, Iman Nadoumi, Sajjad Pourfarjam and Mehdi Nouri.

Iran: Mother pressured to ask her sons to break their hunger strike 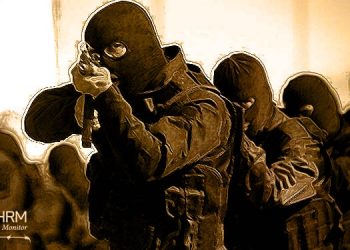