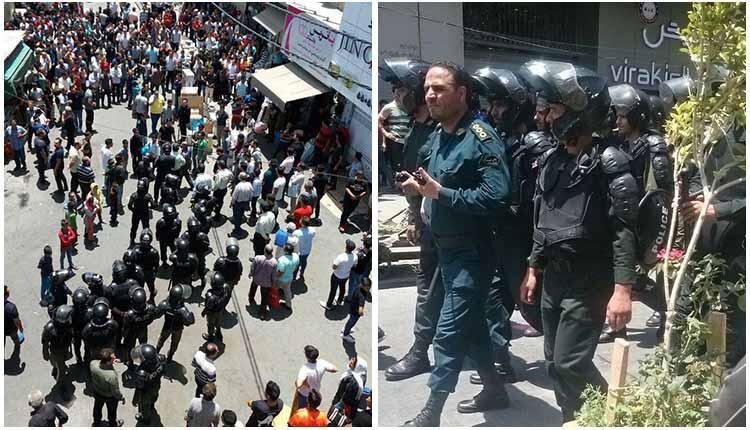 Store-owners closed their stores in the malls and the Grand Bazaar of Tehran for the third consecutive day on Wednesday, protesting high prices and the regime’s destructive economic policies.
They started to demonstrate towards the parliament in which the police officers started to attack them. Police and plainclothes agents raided the Grand Bazaar of Tehran and attempted to disperse marketers who were struggling to protest the volatility of the Rial currency against US dollar prices and customs disruptions. Police threw tear gas towards the protesters and started to beat a number of them.
Reports indicate a number of protesters have been arrested most of whom have been transferred to the former Qasr Prison in Tehran. This facility is now the Greater Tehran police command center.
Acknowledging the arrest of a large number of protesters, Tehran’s prosecutor said yesterday, “These defendants will not be released until their trials are held, like the defendants of the Dec/Jan unrest.”
As the protests in Iran continue growing in size and scope, regime officials threatened Bazaar protesters with execution and long prison terms.
Pointing to the protesting Bazaar merchants, the Chief Justice of Iran, Sadeq Larijani said, “The Islamic Republic will under no circumstances tolerate this. In particular the Judiciary will deal with them firmly. I am hereby warning these disruptors of the economic system. Listen well. Take the cotton out of your ears and open your eyes. Such acts of disrupting the country’s economic system based on the laws related to disrupting the country’s economic system have very heavy penalties. It’s stated there that if this act is found to be a case of “Corruption on Earth”, (the penalty is) execution and if it’s not the case, the sentence is up to 20 years of prison and all the person’s possessions would be confiscated. We will not hesitate to implement this law. Today I’m warning those people, they are not many, the security forces know who they are and we are reiterating right here that they are obligated to identify these people at the earliest opportunity and to introduce them to the Judiciary so that they are justly prosecuted.” (IRIB- Jun. 26, 2018)
One day later on June 27, Khamenei urged Judiciary to crack down on economic protesters.