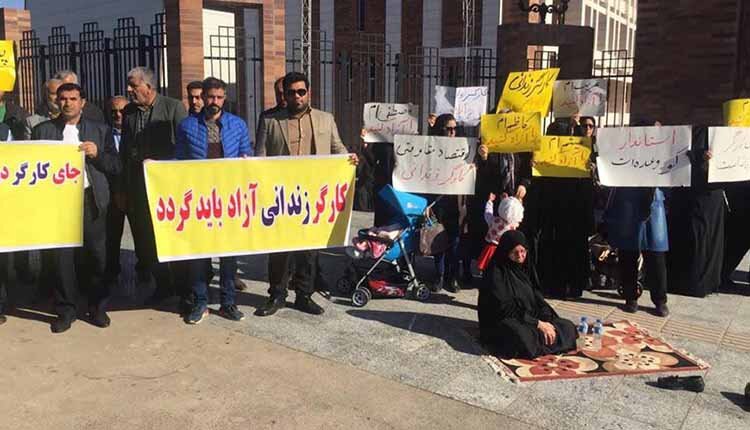 A group of family members of the arrested National Steel Group workers held a protest rally on December 29, 2018, in front of the Governorate of Khuzestan to demand their loved ones’ release.

Before this, the families had rallied on Wednesday for the third consecutive day outside the Khuzestan Province governor’s office. A number of steelworkers were also among the protesters.

The protesters, many children, were holding a large banner reading:

“Dad, I’m waiting for you”
“Detained worker must be released”
“Workers belong in factories; thieves belong in prison”

“Your economic austerities; Our workers in prison”
“workers have economic demands”
“What happened to your promises, Mr. Governor?”

Ahvaz steelworkers published a statement announcing that all the workers stood with the families and children of detained workers and demanded their release.

“We are awaiting the release of our colleagues. Investors cannot play with the workers’ lives,” the statement reads in part.

The statement said that top provincial and judicial officials broke their promises about releasing all the workers and intended to “deceive the public”.

The steel factory in question, located in Ahvaz, capital of the oil-rich Khuzestan province in the southwest, has witnessed labor strikes and protests for the past two months.

Worekers were protesting their unpaid wages and the Meli Bank’s control of the factory while demanding the launch of five more production lines.

The state security forces conducted midnight raids in Ahvaz on December 16 and 17. The raids targeted the homes of Iranian National Steel Industries Group (INSIG) workers and led to the arrest of dozens of workers.

Dozens of workers arrested Sunday night and Monday are still in detention. Many workers are spending nights outside their homes to avoid arrest.

There are fears that the detained laborers are mistreated in prison as the Iranian regime regularly beats and tortures prisoners.

Ali Khamenei has repeatedly maintained that the recent widespread labor protests across Iran are designed by “foreign enemies”.

“One of the major activities of our enemies has been to create a recession and obstacles in our factories and among labor groups, particularly the big ones, so they can provoke the workers,” Khamenei said in one of his shortest speeches ever, addressing the Congress Of 14,000 Martyred Laborers February 5.