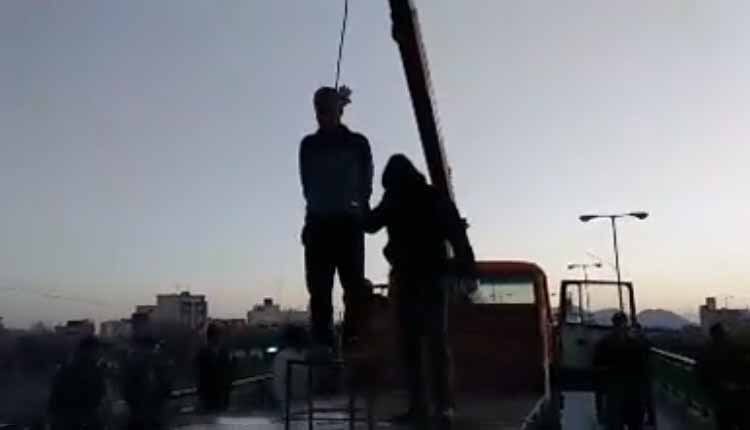 A man identified by the state media as Mohammad Javad Shams, was publicly hanged on January 15, in Falavarjan, in Isfahan, central Iran.

A man was hanged in public in Falavarjan, on Tuesday, the judiciary’s website Mizan reported.

The man identified as Mohammad Javad Shams had been found guilty of murder and rape.
The execution was carried out in Falavarjan, in Isfahan, central Iran, bringing the number of those publicly executed in January to five.

Iran on Sunday publicly hanged 3 men sentenced to death for armed robbery. It took place on January 13, in the city of Yasuj, Kohgiluyeh and Boyer-Ahmad Province.
It followed January 10 hanging of a 31 year old man on sodomy charges in the southwestern city of Kazeroon.

The state-run websites shared a video showing the brutal execution of Mohammad Javad Shams, surrounded by his hangmen on a crane.

Then the noose was placed around his neck before the eyes of the public.

A man who appears to be a state security foece, pushed the chair on which Shams stood before the crane rises slowly, taking his life with it.

Iran is the world’s leading executioner per capita, with many hangings carried out in public. At least 283 executions including 11 in public were carried out in 2018. The real numbers were likely to be much higher as use of capital punishment in Iran is often shrouded in secrecy.

Most of those executed during the period in question were sentenced to death for smuggling, narcotics, and murder.

The resolution had condemned the systematic violations of human rights and fundamental freedoms by the regime and the alarmingly high number of executions, as well as torture and cruel treatment in prisons.