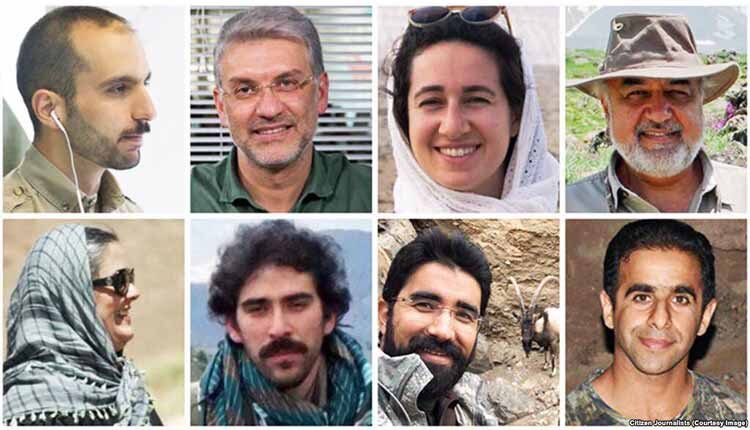 Environmental activist Niloufar Bayani announced that she had been beaten and brutalized, threatened and tortured on numerous occasions by the Revolutionary Guards agents during her year-long detention in an IRGC jail, and was forced to make false confessions against herself. She made the testimony during her second trial session headed by judge Salavati on Saturday, February 2, 2019.

Ms. Biyani who has been held by IRGC intelligence for over a year now said the ‘confessions’ had been made under physical and mental torture and intense psychological pressure and that she had retracted all of them after the first round of investigations,

Bayani and seven other Iranian environmental activists accused of spying appeared in a Tehran court on January 30 for a closed-door trial, local media report.

During the court session they learned that the first half of their indictment is based on retracted forced “confessions.”

Mohammad-Hossein Aghasi, a representative of one of the accused, said that he was not present in court as the state designated its own handpicked lawyers to represent the defendants, according to the state news agency IRNA.

For its part, IRNA reported that there were three lawyers present at the trial and referred to them as “Reza Jafari, Beigi and Hosseini.” The report added that all of the lawyers had been approved by Judiciary Chief Sadegh Larijani.

During the court session, Niloufar Yayani interrupted several times and objected that her ‘confessions’ had become the basis for the trial.

Four of the Iranian environmental activists were charged last year with “sowing corruption on Earth,” a charge that can carry the death sentence in Iran.

Tehran prosecutor Abbas Jafari Dolatabadi has claimed the activists were “seeking proximity to military sites with the cover of the environmental projects and obtaining military information from them.”

Three other activists are accused of espionage and the last one has been charged with “conspiracy against national security,” IRNA reported.

In reporting on the trial, Mizan, the judiciary’s official news agency, and the Fars News Agency, which maintains close ties with the Islamic Revolutionary Guard Corps (IRGC), referred to the defendants as “individuals accused of spying on the country’s military installations.”

The Revolutionary Guards arrested the environmentalists, who are all members of a local environmental group, the Persian Wildlife Heritage Foundation, on January 24th and 25th.

Abbas Jafari Dolatabadi, the Tehran prosecutor, told reporters on February 13th that detained activists are accused of using environmental projects as a cover to collect classified strategic information. However, the Foundation claims to only work to conserve and protect the flora and fauna in Iran.

Until today, the environmentalists’ cases had been shrouded in secrecy other than occasional accusations or comments by judicial officials published by state media outlets.

They have not been given access to lawyers of their choice or have had a trial date set. Family members said on social media late in September 2018 that they were told by judicial authorities that the detained environmentalists can only be represented by lawyers from a pre-approved list of 20 that the judiciary had published in June 2018.
According to reports all of the detainees had been subjected to prolonged periods of solitary confinement and denied phone calls with family members.

Regarding the case, Sarah Leah Whitson, Middle East director at Human Rights Watch said, “Iran’s judiciary is again highlighting its role as key functionaries in a repressive state machinery rather than defenders of justice.” She added, “Iran’s leaders need to search no further for a source of simmering societal anger against them than the judiciary’s despicable treatment of peaceful activists who are only trying to mitigate the country’s many serious problems, including environmental crises.”

Niloufar Bayani was a student of biology at McGill university before she was sentenced to jail in Iran. Bayani graduated in 2009 and later worked for the United Nations Environment Programme.

Nearly a year ago, when she went to Iran to do environmental work, the former resident of Montreal and Toronto was arrested and accused of espionage, and has been in Evin prison, outside Tehran, since then.

McGill University has not commented, but University spokesperson Chris Chapello told the Montreal Gazette that McGill is “aware of the situation and has been in contact with the Canadian authorities.”

Her friend, Hayley Lapalme said in an interview, “To learn this person, who had a wonderful presence in our community here [in Toronto], is now in a prison cell — it’s stunning, really.”

Lapalme is working toward Bayani’s release. “Niloufar is this person who has this lightness, goodness, intelligence and generosity about her that is really contagious,” Lapalme said. “She really brings out the best in people.”

According to Lapalme, Bayani environmental field work included the study of zebra mussels in Montreal and researching marine life in Belize. She went to Iran to do field work with the Persian Wildlife Heritage Foundation, where she set up camera traps to track Asiatic cheetahs, an endangered species in Iran.

For this, Iranian authorities accused Bayani of spying. She was charged with “sowing corruption on Earth,” for which she has not yet had a trial, and could face the death penalty.

“The kind of work that we can practice freely and that is appreciated here, it’s work that’s being criminalized now in Iran,” Lapalme said.

An open letter that demands the release of Bayani and eight other environmentalists in Iran, was signed in November 2018 by more than 300 conservationists, including primatologist Jane Goodall. In the letter, the use of camera traps is described as “a standard tool for wildlife monitoring, being deployed for that purpose in many regions around the world.” The letter states, ”We are convinced that their work and research had no second means or objectives. We are horrified about the thought that the neutral field of conservation could ever be used to pursue political objectives.”

The publication of the letter is “certainly something that buoys us and gives us hope,” to Bayani’s friends and family.