File photo: Masked policeman is seen after an execution in Iran.

This came just one day after the execution on drug charges of a university student in Central Prison of Kerman.

According to Baluchi human rights activists, 24-year-old Mohammad Bameri was from an empoverished family, who resorted to drug smuggling to earn a living and pay for university expenses.

A prisoner identified as Kamal Shahbakhsh was hanged also on drug related charges earlier in this facility.

On the same day, another prisoner was executed in Sanandaj, west of Iran, despite his family and human rights activist’s attempts to have the execution stopped.

The victim, Mohammad Irani who had been found guilty of murder, was hanged while he was on hunger strike with his lips and
eyelid sewn to protest against the execution sentence.

In Iran a convicted murderer has no right to seek pardon or commutation from the state, though this right is protected by Article 6(4) of the ICCPR. The family of a murder victim has the right either to insist on execution or to pardon the killer and receive financial compensation.

The Iranian authorities contend that qesas – the sentence for convicted murderers – is not execution, despite the fact that people sentenced to qesas are put to death by the state. This contention is not accepted in international law. The vast majority of child offenders on death row in Iran have been sentenced to qesas for murder.

In another development four prisoners were executed on April 27 in Central prison of Shiraz.

The state-run ROKNA news agency reported the execution of two men, identified only as Kaveh and Habib on charges of rape and robbery. The state-run media did not mentioned where the executions conducted but speculation is rife that he has been taken to Evin prison.

Reports obtained from inside Iran indicate that two Baluch prisoners were also executed that day in the same prison. The victims, Dorhan Heydari and Mirhan Shah Ghasemi had been sentenced to death on murder and drug related charges.

Earlier, two 17-year-old boys in Iran were also executed on charges of rape and robbery, after a trial that appears to have seriously breached fundamental due process guarantees.

The Iranian regime has one of the worst human rights records in the world. Year after year, it holds the record of the number of executions per capita.

According to Amnesty International, at least 253 people were executed in 2018 in Iran, while the number is over 3,500 since 2013, when supposed moderate Hassan Rouhani took power. 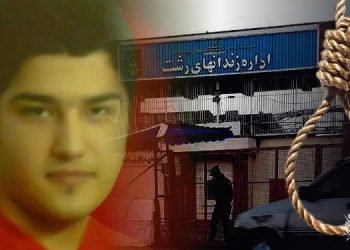