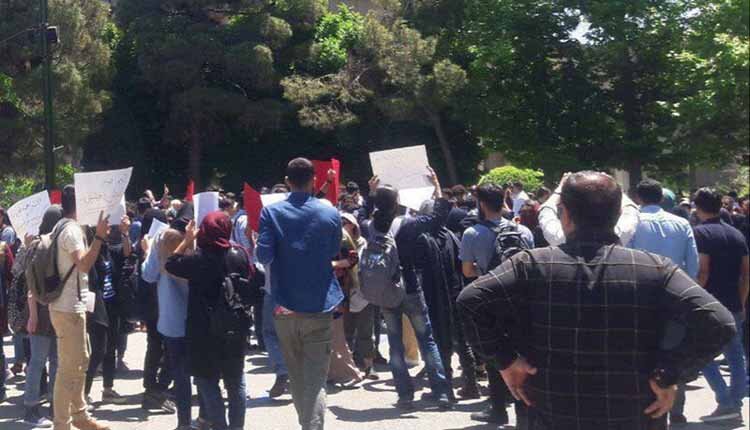 The university’s Regulations Committee is imposing repressive rules, according to the students.

The Students continued their protest by gathering in the auditorium of the School of Fine Arts, demanding the president and vice president to answer. In response, Bassij forces attacked the students and brutalized them.

Videos on social media show students chanting slogans about their rights to choose what to wear and generally about freedom of choice.

The students also chanted slogans against unemployment and abuse of women.

One of the students was seen holding a sign reading, “Freedom of choice is our right.”

The report says the students — both men and women — briefly scuffled with another group of Tehran University students who support the country’s conservative dress code.

ISNA quoted the university’s vice-chancellor Majid Sarsangi as saying that “There has been no change in the university’s dress code.” He also denied claims by students about the presence of the “Dress Code Patrols” at the university, adding that “disciplinary forces warned students to respect the rules about Ramadan.”

Sarsangi claimed that two opposing groups of students with different ideologies have clashed with each other.

During the past few weeks, Tehran University students have witnessed a growing number of IRGC Basij members deployed to the campus, accompanied by plainclothes intelligent agents.

The measure sought to harass female students over their clothes and head coverings and enforce the compulsory veil through cracking down on female students. Security forces were stationed all across the campus to enforce disciplinary rules and to terrorize the students, especially the female students.

It is worth noting that the U.S. State Department recently designated the Islamic Revolutionary Guards, IRGC, as a “Foreign Terrorist Organization” (FTO).

A glance at the two-month record of Ebrahim Raisi