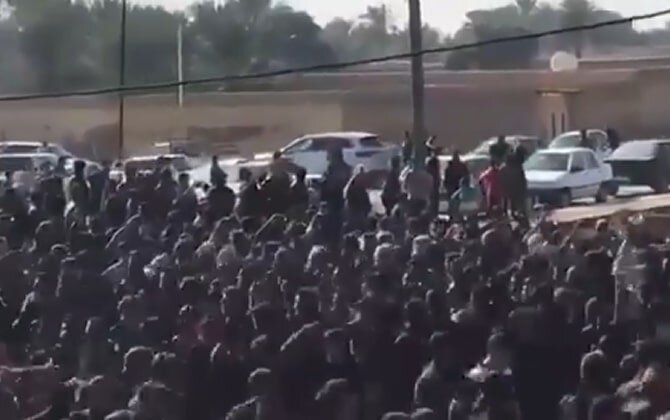 November 11, 2019 -Locals in Kut Abdollah, in the oil-rich Khuzestan province, gathered in large numbers Monday to mourn and protest the death of a Hassan Heydari, an ethnic Arab poet, killed under suspicious circumstances.

Dozens of Arab-Iranians have been arrested during protests in southwestern Iran that started Sunday following news on the suspicious death of a local poet.

Following his death, hundreds of Arab-Iranians, who blamed the regime for the death, took to the streets in Ahvaz and nearby towns such as Kot Abdollah and Shadegan to mourn and protest.

The mass protests started Sunday evening and continued Monday during his funeral services.

Supporters of the Arab-Iranian poet held mourning ceremonies for the young poet with a number of people shooting live bullets in the air, as is customary among Arab-Iranians.

There were also reports of skirmishes between security forces and protesters.

In some of the videos circulated on social media sounds of gunfire is heard. One video showed protesters in Kut Abdollah pulling down the flags of the Iranian regime from flag poles.

The state security forces reportedly arrested dozens of protesters during Sunday demonstration and the burial ceremony on Monday.

At least 20 protesters recently arrested have been identified by name, while local sources say the number of those arrested is much higher.

Iranian authorities have not revealed the status and whereabouts of the detainees, placing them at increased risk of torture and other ill-treatment.

The 29-year-old poet was arrested last year but later freed on bail. It is not clear why he was hospitalized and what was the exact cause of his death. Protesters believe that his death was suspicious.