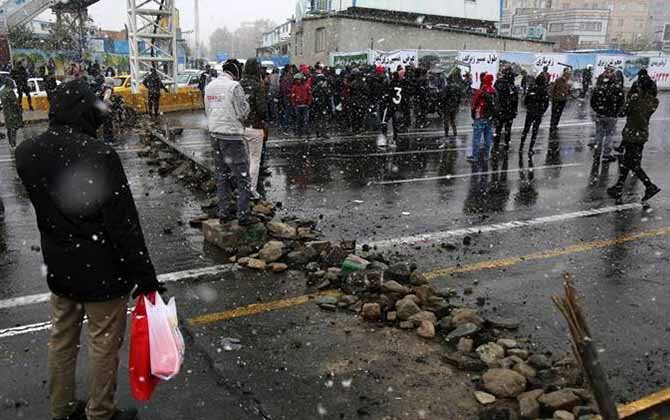 Iran’s Supreme Leader Ali Khamenei backed gasoline price increases today, calling the protesters “hooligans.” He openly ordered for a decisive crackdown on the protesters and instructed the security forces to act in line of their “duties.”

He described those setting fire to public property during the protests as “bandits” backed by the enemies of Iran, without elaborating.

“Some people are no doubt worried by this decision … but sabotage and arson is done by hooligans not our people. The counter-revolution and Iran’s enemies have always supported sabotage and breaches of security and continue to do so,” he said, according to state TV.

Khamenei said the increase in gasoline prices was based on expert opinion and should be implemented, but he called on officials to prevent hikes in prices of other goods.

Dozens of videos published on social media channels and from sources inside Iran showed large protests in the capital Tehran, northeastern city of Mashhad, various cities in the southwestern province of Khuzestan, and northwestern city of Tabriz. Iranians in the western province of Lorestan, Kermanshah and Sanandaj also took to the streets. In Kermanshah and Sanandaj, locals clashed with security forces.

Internet access in Iran was curbed after the protests at the order of a state security council, state-run ISNA news agency reported.

Meanwhile, an informed source told the state-run ILNA news agency that the internet had been shut down due to security reasons. “The recent unrest has led the Security Council to shut down the internet”. The source said it was not clear when the net would be reconnected.

The state security forces have shot and killed at least 27 protesters in different cities though the number could be higher. Dozens of protesters were wounded.

Nov 16- Andisheh, Tehran, #Iran
A group of protesters are seen carrying away an injured man.
Security forces opened fire on protesters in various cities, killing at least 8 & injuring several others. Some reports indicate there are more than 8 dead. #IranProtests pic.twitter.com/ZXmyJpP4eF

In the central city of Sirjan where one person was killed in overnight on Friday, local hospitals could not accommodate so many wounded, and several them were hospitalized in the city of Kerman’s Seyyed Ol-Shohada hospital.

Iran’s chief public prosecutor, Mohammad Jafar Montazeri, called the protestors “saboteurs” and warned they would face “severe punishment” if arrested. He has also alleged that foreign powers were behind the protests.

Meanwhile, the regime’s Minister of Interior threatened Iranian protesters last night on state-run TV and said that they “had been identified” and “would be dealt with”.

At least 61 Killed in Iran during gas price protests