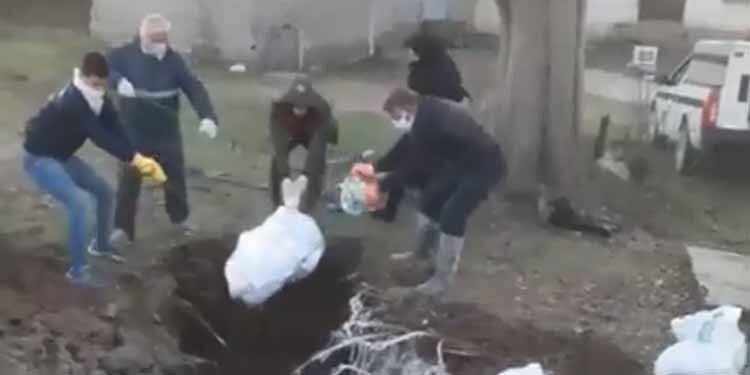 Iran’s Ministry of Health said Saturday afternoon Mach 7 that coronavirus has claimed 145 lives from among 5823 Iranians who have been infected by the COVID-19 virus.
Reports from Iran, however, indicate that regime officials are still providing very low figures.
According to local reports, the real numbers are much higher as is evident from the alarming conditions in hospitals which are overcapacity and no longer admit new coronavirus patients.
Shariati Hospital in Mashhad, northeast Iran, has reached its full capacity and only admits patients suffering from severe respiratory and lung related problems. They tell other people to stay at home. A healthcare worker in Shariati Hospital said 14 COVID-19 patients passed away in just two days in the hospital.
In the northern city of Rasht, hospitals are full and there is no room for new COVID-19 patients.
A video shared online, shows the hallway of Sayad Hospital in Gorgan, also in north Iran, filled with beds with COVID-19 patients.

Gorgan, N #Iran – Sayad Hospital
Video shows the hallway of Sayad Hospital filled with beds with #COVID19 patients.
Other hospitals in Gorgan are also overcapacity.
The regime is hiding the scope of the crisis. pic.twitter.com/WPdlBLBm3e

Another heartbreaking video circulating on social media showed an elderly man collapsed on the ground outside of the Rasoul Akram Hospital in Rasht, in the northern province of Gilan. The voice on the video said that the hospital was overcapacity and would not admit the man, who was coughing and had a very hard time breathing.

This man who is suspected of #COVID19 was not admitted to Rasoul Akram Hospital in Rasht, because the hospital is over capacitated with #coronavirus patients.
Other hospitals in northern #Iran are also full. The regime is hiding the scope of the crisis.pic.twitter.com/k0oTVSOzER

Last week a video showing tens of bodies of coronavirus victims wrapped in black sheeting and lined up on the floor in several rooms of the morgue in Qom was published on social media. The person who took the video said bodies had been piling up there for several days waiting to be washed and prepared for burial.

Qom Deputy Prosecutor has announced that the person who published the footage from a morgue was arrested and handed over to the Judiciary.
The regime is covering up the scope of the #coronavirus outbreak in #Iran#COVID19 https://t.co/0jmSSNXjxH

These were a few out of numerous reports from hospitals in various cities indicating the actual number of casualties is far higher than the claims made by Iranian officials.
The state-run media and authorities’ admissions further prove that the regime is trying to keep a lid on the actual death toll.
“The outbreak of the coronavirus has made the situation in Mashhad critical. The Mashhad’s mayor called on all citizens to not come out of their homes and announced urgent situation”, reported the state-run daily Hamshahri on March 3, 2020
According to Aftab, another state-run news website, the governor of Khorasan Razavi province said: “In the past few days the outbreak of this virus has accelerated in Mashhad. For this reason we ask people, if possible to stay home.”
Mehdi Shadnoush who has been appointed by the Health Minister to manage the coronavirus outbreak in Gilan on Thursday said the situation was “grave” in the province. “There are people who have lost fathers, mothers and other loved ones to the disease in a short time and their other loved ones are now in hospital,” he said.
Coronavirus has spread to almost all of Iran’s provinces. While Iranian regime President Hassan Rouhani previously claimed life will return to normal by the end of February, he was forced to acknowledge the fact that coronavirus has gone out of control. “This disease has spread widely to almost all of our provinces,” he said in Tuesday’s cabinet meeting.
The regime has even canceled Friday prayers in all provincial capitals this week because of the coronavirus outbreak, which is unprecedented since the 1979 revolution.
The National Council of Resistance said on March 7, that its sources in Iran reported more than 2,000 COVID-19 fatalities across Iran.