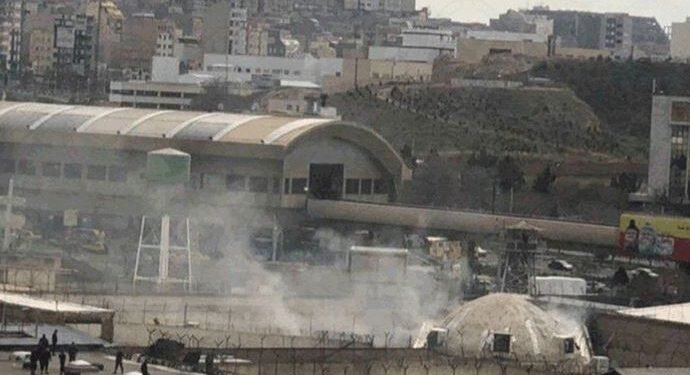 Security forces clamped down on inmates fearing coronavirus infection at Tabriz Prison in northwestern Iran to stop their protest against prison conditions.

Inmates staged a protest on Wednesday afternoon to protest being denied leaves. They also protested admission of new prisoners to the wards without being quarantined for a period.

The protest was resumed on Thursday with some prisoners setting their blankets on fire. A number of prisoners managed to escape.

Units of the Revolutionary Guards used firearms during their raids into wards 7 and 9, where 800 prisoners are held. Smoke was seen rising to the sky from inside the prison and sounds of gunfire and ambulances were heard in areas adjacent to the facility.

Reports indicate that the violent security crackdown led to the death of at least one inmate and injury of seven others. Unconfirmed reports suggest that three or four people were also killed.

In a video posted on social media sound of gunshots can be heard from the prison.

Clashes between prison guards and inmates are still ongoing in various wards of the prison, including ward 7.

Special Forces of Azerbaijan Province are deployed in front of the prison’s main gate and the surrounding areas are being tightly controlled. So far, they have arrested 15 prisoners who had escaped.

Snipers are stationed on a bridge next to the prison, to target anyone who attempts to escape.

A relative of one of the detainees at Tabriz Prison said, “New inmates are admitted to the prison’s wards without being quarantined for a few days. If one of them is infected with the virus, the other inmates will also be affected. Today, an ill prisoner with COVID-19 symptoms referred to the prison clinic, but he was returned to the ward without receiving medical treatment. Other inmates are worried that he might be infected and could transmit the disease to others.”

While the number of victims of coronavirus infection is increasing exponentially every day across the country, hundreds of thousands of inmates in various prisons are at risk and a major disaster is in the making. Despite domestic and international calls for the release of the majority of prisoners, especially political prisoners, the Iranian regime is refusing to do so.

In another development on March 19, 2020, prisoners at the Parsilon Prison in Khorramabad (western Iran), who were at risk of coronavirus infection, rebelled, disarmed the guards, and escaped. Prison guards and the repressive forces opened fire on about 250 fleeing inmates and killed several of them.

In yet another incident on March 20, 2020, prisoners in the Central Prison of Aligoudarz, in the western province of Lorestan, rebelled and disarmed some of prison guards, attempting to escape. Clashes ensued between guards and prisoners at risk of Coronavirus infection, extending outside the prison. Units of the Revolutionary Guards intervened and the clashes continued for several hours. A number of prisoners managed to escape, some were shot to death or wounded. Some of the prison guards and IRGC members were also wounded.