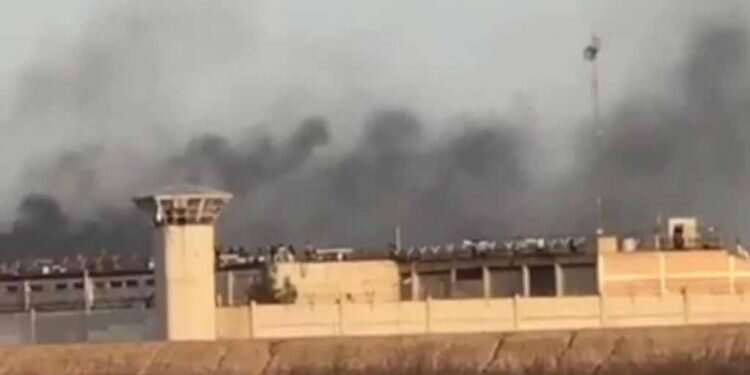 “Around 36 prisoners in Iran are feared to have been killed by security forces after the use of lethal force to control protests over COVID-19 safety fears,” Amnesty International (AI) said in a statement on Thursday, April 9.

“In recent days, thousands of prisoners in at least eight prisons around the country have staged protests over fears of contracting the coronavirus, sparking deadly responses from prison officers and security forces,” Amnesty added.

Since the coronavirus outbreak in Iran, the Iranian regime has refused to release prisoners, along with its criminal cover-up and inaction. It has left prisoners as the most vulnerable sector of society to the coronavirus defenseless in facing coronavirus. This has resulted in various riots by prisoners across Iran.

Instead of helping prisoners or releasing them, the regime resorted to brutal suppression. In this regard Amnesty International wrote: “In several prisons, live ammunition and tear gas were used to suppress protests, killing around 35 prisoners and injuring hundreds of others, according to credible sources. In at least one prison, security forces beat those taking part in the protest action, possibly leading to the death of an inmate.”

“It is abhorrent that instead of responding to prisoners’ legitimate demands to be protected from COVID-19, Iranian authorities have yet again resorted to killing people to silence their concerns,” said Diana Eltahawy, Amnesty International’s Deputy Regional Director of Middle East and North Africa.

In another part of its report, Amnesty International wrote: “Independent media and human rights organizations have reported that inmates from several prisons have tested positive for the virus. Consequently, many prisoners have staged hunger strikes in protest at the authorities’ failure to respond to their demands for releases, testing in prisons, provision of adequate sanitary products and facilities, and the quarantining of prisoners suspected of infection.

“On 30 March and 31 March, according to independent sources including prisoners’ families, security forces used excessive force to quell protests in Sepidar prison and Sheiban prison in the city of Ahvaz, Khuzestan province. The head of the police force in Khuzestan province admitted that members of the Revolutionary Guards and the paramilitary Basij force suppressed the protests after some inmates set rubbish bins on fire,” the report added.

Senior Iranian officials and the Judiciary have not commented on these reports.