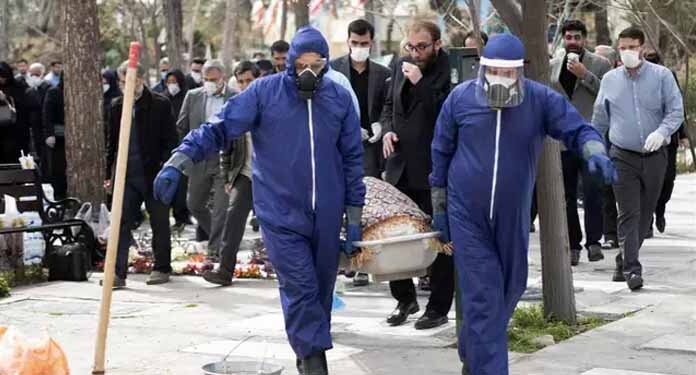 Two senior Iranian officials disclosed that the authorities have arrested thousands of Iranians during the coronavirus pandemic for exposing the regime’s Covid-19 cover-up and mismanagement of handling the crisis.

The Spokesman of Iran’s Armed Forces on Tuesday, April 28, said the state security forces and the Revolutionary Guards (IRGC) paramilitary Basij forces, have arrested 3,600 people for “spreading rumors about coronavirus”.

“As for the actions taken to confront those who spread rumors, the Cyber Police have done a great job,” he said.

“3,600 people who spread rumors on social media were arrested by the police and the (Paramilitary) Basij forces, and 1,136 lawsuits have been filed against them,” he added.

Shekarchi warned that rumors are a means of psychological war against Iran and said those who lead rumor campaigns will be arrested.

The head of the Cyber Police Diagnosis and Prevention Center also told state-run TV on Wednesday, April 29, that the regime was covering up the number of deaths from the virus.

“Before COVID-19 even entered the country and before it was officially announced, we had numerous reports and rumors from videos that showed coronavirus patients hospitalized or patients that had collapsed on the street,” Colonel Mohammad Ali Rajabi said.

The Cyber police official said that people had started criticizing the regime for not closing its borders with other countries and not implementing quarantine, adding that there were efforts to “cause despair among the people”.

“For example, they wanted to make it seem as though the (state) was not transparent in this regard and that the people were not given the truth,” he told state-run TV.

“At the same time, they tried to imply that the government was inefficient and that the country’s health and administrative system could not manage the COVID-19 epidemic,” the Cyber Police official added.

Since the beginning of the coronavirus outbreak, the Iranian regime has engaged in systematic Covid-19 cover-up of cases and deaths.

The regime tried to downplay the crisis. People were not alerted, and the quarantining period started very late, and it was not accompanied with government financial backing of the people.