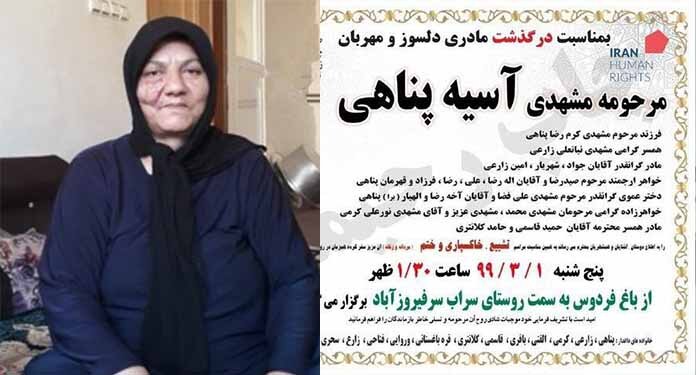 Municipal agents beat a 55-year-old woman to death for protesting the demolition of her newly built home in Kermanshan, western Iran.
According to eyewitnesses, Asieh Panahi, a mother of seven, was beaten by municipal agents in the presence of the State Security Forces (SSF).
An informed source said that Asieh Panahi suffered a fatal heart attack after the agents assaulted her with pepper spray.
Although she cried out, “I have heart disease – don’t spray me,” the municipal agents dragged her to the ground and sprayed her in the face.
The SSF also beat Ms. Panahi’s daughter and granddaughter; the daughter’s legs were visibly bruised.
The Municipality in the city of Fadak in Kermanshah province completely razed the woman’s newly built home on May 19 because it did not have a building permit. However, city officials did not have the proper documentation to authorize the demolition.
Officers removed Ms. Panahi from the scene even though she was injured. They wanted to take her to a camp for drug addicts.
The defenseless woman died 40 minutes after being beaten by officers.
Kermanshah Municipality refused to accept responsibility for the woman’s death. They falsely claimed that they had arrested her outside the city for being an addict.

Video of municipal agents demolishing the home of 55 yo Asieh Panahi in Kermanshah, W #Iran
She can be seen in the video, trying to stop the agents by sitting in the loading shovel just minutes before being beaten to death.https://t.co/3NsZeIwRZN pic.twitter.com/AgkmQWWifq

Municipal agents regularly demolish homes in various parts of Iran, even during the COVID-19 epidemic, when people are asked to stay home.
Earlier on April 2020, Basij agents in Khorramabad attacked the low-income neighborhood of Falak al-Din, destroying 11 residential properties.
The authorities attacked and destroyed impoverished peoples’ houses in Khorramabad province in western Iran. This took place amid the coronavirus outbreak, which has claimed thousands of lives.
During the demolition, an elderly woman was left under the rubble, which worsened her physical condition.
At a time when 80 percent of the country’s population lives below the poverty line, and despite the fact that the coronavirus pandemic disproportionately affects the poor, security forces in Iran are demolishing low-income homes, ruthlessly leaving the poor homeless.