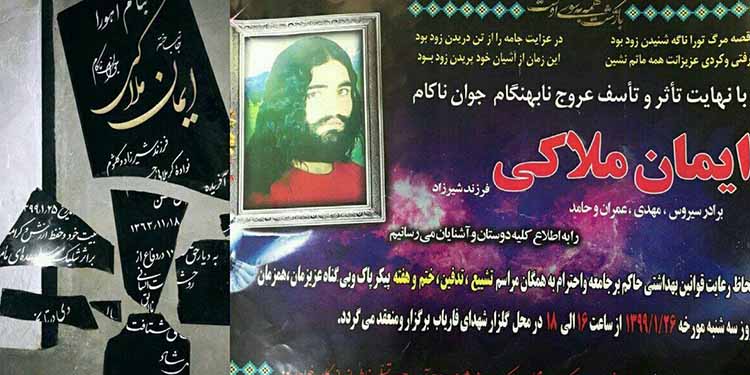 The Intelligence agents of the State Security Force shot and killed a young man at his home in the southern Dashtestan County.
Iman Malaki, 35, was shot and killed by the state forces who stormed his home on April 13, to arrest his brother.
Iman Malaki’s resistance against the sudden attack of the plainclothes agents who did not have any arrest warrant. He was shot in the neck and back and eventually died of severe bullet wounds.
The family of Malaki has reportedly been warned not to speak to media.
His tomb stone was destroyed on Monday June 1. It was written on the tombstone that he had been killed by the state forces.
A source close to Malaki’s family said: “The state security forces went to the family’s house without any prior notice and jumped over the wall to enter the house. This unexpected arrival and their behavior led to a fight. Iman Malaki was eventually injured in the neck, legs and back. The commander of the state forces entered the house after the sound of gunfire and introduces herself. Officers were about to leave the house at the time, but family members stopped them from leaving and asked them to take Iman to the hospital. Because they were told in an emergency call that there was no ambulance at the moment. Iman was subsequently transferred to a local medical center and later to a hospital in Borazjan (the center of Dashtestan County in Bushehr province, southern Iran). Unfortunately, the injuries and bleeding were so severe that he lost his life.”
Iman Malaki’s family has lodged a complaint against the state security forces for the killing of their loved ones but it is said that the state security forces have accused his brother of murder.
Iran’s state forces carry out such shootings without any legal implications and with impunity.