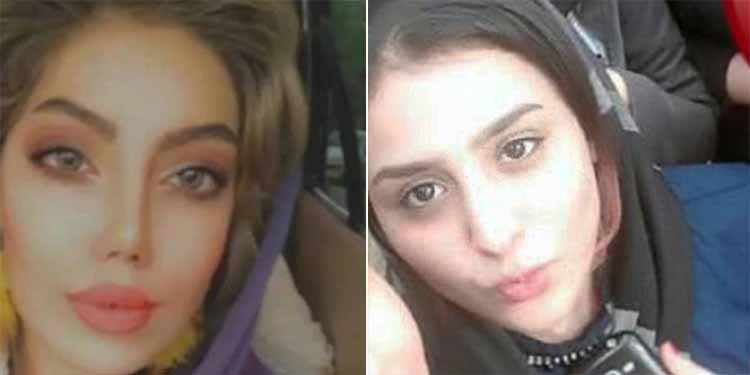 L-Reyhaneh Ameri, 22, was killed on June 15 by her father with an ax for coming home late. R-Fatemeh Barihi, 19, was beheaded by her husband on June 13.

Only three weeks after the harrowing murder of Romina Ashrafi,13, who was beheaded in her sleep by her own father, two young women are murdered by their family members.
The tragic deaths of Fatemeh Barihi, 19 and Reyhaneh Ameri, 22, who were murdered by their husband and father respectively, reinitiated the bitter debate over the savage honor killings in Iran sanctioned and institutionalized by the laws of the clerical regime.
Reyhaneh Ameri, 22, was killed on June 15 by her father with an ax for coming home late.
Reyhaneh had returned home at around 11:30 pm the night before and had a quarrel with her father.
Her sister went to her parents’ home on Monday at around 8:30 or 9 am. When she entered there was no one home and Reyhaneh’s room was locked. She knocked constantly and no one answered. She noticed the rugs were in disarray. A few minutes later her father came home.
Noticing her daughter the father was caught off guard, said he doesn’t know where the others were and entered his bedroom. When he came out he was still tucking his shirt in and rushed out of the house.
When the mother came home the sister asks about her sibling.
Her mother said when left the house in the morning, she was still in her room and her door was open. Then she told her daughter what happened the night before.
Reyhaneh’s sister became nervous and said something might have happened to her. Her mother and sister finally opened her door and saw the room in a mess. All her clothes were on the floor. Her mother began to gather up the clothes, only to see they are wet.
When the mother pulled the clothes aside she saw the middle of the room is full of blood. There was blood also on the walls.
They called the police. When they arrived, the officers saw blood under the rugs. They believed Reyhaneh was dragged from her room to a car.
Reyhaneh’s father had many axes and they realized one of them was not in its place. They started thinking he may have used it to attack her.
While the police waited for the man to come back home, they tracked Reyhaneh’s mobile phone to a deserted area. The tracking device showed the location near the village of Ekhtiar Abad, a 15-min drive from the city of Kerman in south-central Iran.
When the father came home he was immediately arrested by the police. He was angry and denied knowing anything.
The trunk of his car was full of blood. So was the back license plate. Reyhaneh’s father was arrested and her mother was sent to a hospital.
The police searched for Reyhaneh until 11 pm. Her father did not say anything other than that it was not him and he had not killed her.
At 11 pm he said with a smile that he did kill her with a blow of his ax to her head, and left her body in an open area near the city of Kerman.
When they find Reyhaneh she was dead. Physicians at the forensics said she was alive until 9 pm. She was suffering for hours.
Reyhaneh’s father had previously told his wife that “One day I will kill that girl.”
In 2017 he once tried to kill her and severely beat her with a stick, leaving her entire body swollen. Reyhaneh’s arms and leg were broken and her sister intervened to save her life.

Another woman, Fatemeh Barihi, 19, was beheaded by her husband on June 13 in the southwestern city of Abadan.
Fatemeh was forced to marry to her abusive cousin at the age of 17. State media justified this heinous murder by writing this is the result of Fatemeh fleeing her husband and betraying him the day after their marriage.
The murderer, Habib, 23, who is Fatemeh’s cousin, brought the murder weapon, which was a bloody knife, to the police station.

Reyhaneh Ameri, 22, was killed yesterday by her father with an ax for coming home late.
The responsibility of #Iran regime’s officials in honor killings becomes evident where the law institutionalizes extra-judicial executions by family members. pic.twitter.com/3xqIdk7fNU

Honor killings have already taken place in this family. Fatemeh’s aunt, who had filed for divorce several years ago due to her husband’s addiction, had been previously killed by her brothers and her husband.

The responsibility of the regime’s officials in honor killings becomes evident where the law institutionalizes extra-judicial executions by family members.
Article 630 of the State Punishment Book stipulates that a woman can be instantly murdered if her husband finds her while having sexual relation with another man.
Article 630: Whenever a man finds his wife during adultery with another man and is sure of his wife’s consent in doing so, he can instantly kill both of them.
Also Article 301 of the Punishment Law states that retribution for the murderer, i.e. execution, is applicable only if the murderer is not the father or paternal grandfather of the victim. (The Islamic Punishment Law adopted in April 2013)
It must be noted that the adoption of such laws as well as unfair trials come into play after a plethora of miseries and misfortunes the mullahs’ regime has imposed on the people of Iran for more than 40 years.
Rampant poverty, inadequate education, limited access to information, and promotion of a misogynous culture by all media, text books, radio and television, and even movies, coupled with the common practice of violence in the streets and the scenes of public flogging and execution to create an atmosphere of terror and repression and fend off popular uprisings, lead to circumstances which legitimize honor killings and make murderers out of fathers and brothers.