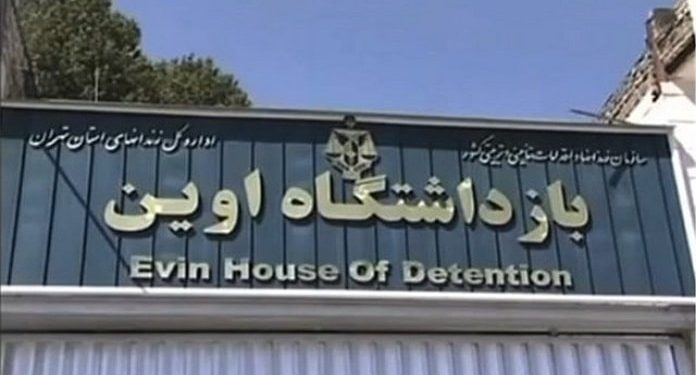 Political prisoners detained in Ward 8 of Evin Prison have rebuked the regime’s claims about the conditions in the prison during the coronavirus pandemic.

The prisoner sent a letter on August 13 after the state TV’s “20:30” program on August 12 aired a report about the notorious Evin Prison, claiming health protocols are followed and no one has contracted the virus in the prison.

For years the IRIB’s “20:30 news” has been the regime’s tool to broadcast fake news and whitewash its crimes and flagrant violation of human rights in Iran.

The political prisoners detained in Ward 8 of Evin Prison wrote, “What was broadcast from state TV went beyond lies and fake news. None of us had ever heard of, let alone used the claimed ‘disinfecting tunnel’ upon our entrance to this prison. The timespan of an inmate’s stay in the ward one is not 14 days but merely a few hours and 24 hours at max. This is where new inmates are held and then transferred to wards four, seven and eight in formalist fashion, and then placed alongside other inmates in so-called quarantine fashion.

“A report was aired from ward four regarding portraying rooms that have been prepared by [regime insiders] who have stolen ordinary people’s money from various credit firms, a number of famous embezzlers, and former Revolutionary Guards (IRGC) officials who are too afraid to even provide their real names. For example, one of these individuals is identified as ‘Commander Seif.’ The rooms showed on TV are allocated to individuals such as Hossein Fereydoon (brother to regime President Hassan Rouhani), former Tehran mayor Mohammad Ali Najafi (condemned on murder charges; he shouldn’t even be held in this ward or Evin prison) and Mehdi Hashemi, son of former regime president Ali Akbar Hashemi Rafsanjani, who is held in a special room of ward seven when he is not out on leave.

“The story of ward 8, however, is different. The prisoners themselves say this ward is used by the authorities as an exile center. The clinic shown on TV actually lacks any medical equipment, supplies and medicine. It cannot provide even the smallest medical service for any kind of patients.”

Earlier, a random Corona test done in Ward 8 of Evin Prison on Sunday, August 9, revealed that 12 inmates had contracted the coronavirus.

Following the coronavirus outbreak, 27 political prisoners in Ward 8 of Evin prison held a sit-in protest on Monday, August 10, in the courtyard of the guardhouse. They demanded an immediate investigation into the dire conditions at Evin.

Meanwhile, Human rights lawyer Nasrin Sotoudeh, has begun a second hunger strike since August 11 to protest the refusal of the authorities to free political prisoners endangered by coronavirus outbreaks in notorious Iranian jails.