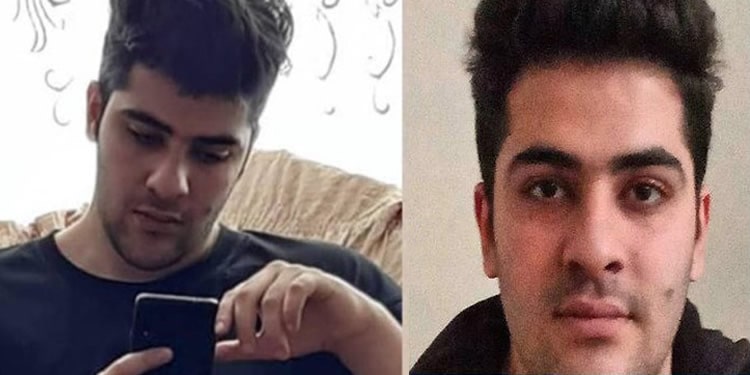 The Kurdish man, Mehrdad Taleshi had been arrested on February 1, 2021, in a metro station in Tehran.

Mehrdad Taleshi was a 20-year-old athlete from the western city of Divandere, Kurdestan Province. He had moved to Tehran two years ago to live with his sister.

Hengaw human rights website reported that at 10 pm on the same day he was arrested, Mehrdad Taleshi was transferred to the Shahpour Police Station in Tehran where he was brutally beaten and killed under torture. so that the beatings on his head and neck were quite visible.

The report said marks of torture were found on his head and neck.

Mehrdad Taleshi has been arrested on suspicion of carrying drugs with another person, whose identity and fate is not clear. Even his name has been removed from Mehrdad’s case.

Report indicate that the young man was killed due to blows to the head, but intelligence claimed that “the victim had a stroke for fear of being arrested!”

However, according to his family and friends, Mehrdad was a ‘cheerful, athletic and brave’ young man, and the possibility of a stroke for fear of being arrested is a ‘nonsensical’ claim about him.

Intelligence officers delivered the body of the Kurdish man to Baharloo Hospital at 6:30 a.m. on Wednesday, February 3.

Mr. Khosrow Taleshi, Mehrdad’s father, was called from Baharloo Hospital at 8:30 on the same day, and was told that his son was there.
After going to the hospital, he found his son’s body and refused to deliver it. In response to his question about the cause of his son’s death, hospital officials said, “We do not know anything about this. The body was handed over to us by the Intelligence Office.»

The family has stated that Mehrdad was a healthy young man who had no criminal record or even history of drug use.

Mehrdad Taleshi’s body was buried under security measures on Sunday, February 7, in Sanandaj.

The authorities have pressured the family not to speak to the media, hold public ceremony or filing a judicial complaint.

Even though confessing under torture is not credible evidence even according to laws of the Islamic Republic, many people have been forced to confess to crimes they have not committed and are then given heavy prison terms or are executed based on those confessions.
There have been reports of deaths under torture during interrogations.

Last month the intelligence police tortured a 35-year-old inmate to death in western Iran. Bahman Oghabi was brutally beaten until he passed out in an Islamabad police station, and later passed away in the hospital. He detained on December 31, 2020. He was beaten at the police station on January 3 and was in intensive care under strict security after he passed out. According to the report, the police told the Oghabi family that their son went in a coma after taking tramadol (a painkiller). His family said Oghabi did not even smoke let alone take any drugs.