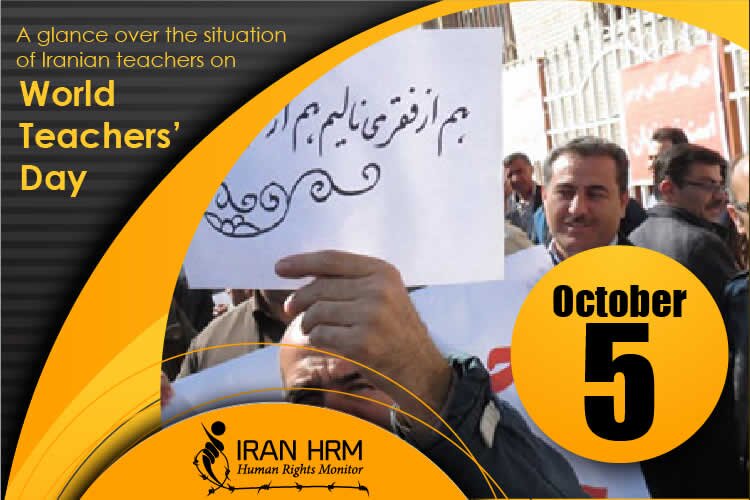 World Teachers’ Day, is observed every year on October 5 since 1994,

aiming to raise awareness about the importance of the role played by teachers worldwide.

In democratic countries, teachers are a cultural sector who play a significant role in educating future generations and advancing the society.

In Iran, however, teachers are not given the opportunity to play a constructive role in education. Under the pressure of poverty, they fail to fulfill even the minimum educational duties.

Teachers are grossly underpaid and sometimes they do not receive their meager salaries for several consecutive months. Iranian teachers also are deprived of insurance, bonuses and other benefits.

Education Ministry statistics show that some one million Iranian teachers make between $200 to $1,400 per month.

The 2014 poverty line in Tehran for a family of five stood at about $900. Therefore, many teachers end up living under the poverty line. So they have to work two or three shifts or have several jobs.

This situation has a direct impact on the quality of their work and education of students.

Iranian teachers have been demanding enactment of the Pay Parity Bill, which could promote their livelihoods, minimum benefits and equal pay similar to other government employees.

Iranian educators are deprived of the right to organize. Nevertheless, they have staged nationwide protests over the past years to demand their basic rights. The Iranian regime has not responded to their demands and security forces have harassed, repressed and imprisoned Iranian teachers. This is while according to Articles 26 and 27 of the Iranian Constitution, holding protests and rallies are free.

In one of their recent largest gatherings, thousands of working and retired teachers took to the streets on Thursday, March 10, 2017, staging nationwide protests, demanding the release of their imprisoned colleagues and condemning judiciary rulings against the teachers’ community.

They also demanded payment of their past due salaries and minimum benefits and equal pay similar to other government employees.

In Tehran, teachers were joined by colleagues from Karaj, Shahriar and Qom outside the parliament. Their placards read, “Free imprisoned teachers,” “Decent insurance is our right,” “Enough with poverty and discrimination” and “Release Ismail Abdi (the imprisoned head of the Teachers’ Union).”

Teachers are deprived of having their own independent associations and organizations. Many of their representatives have been arrested and imprisoned for daring to defend teachers’ dignity and livelihood. Amongst the prominent trade unionists and teachers who are unlawfully imprisoned for their legitimate activities are Arzhang Davoudi, Ismail Abdi and Ebrahim Baghani.

Ismail Abdi, the Secretary General of Iran’s Teachers’ Trade Association (ITTA) had been arrested on 27 June 2015, on charges related to his peaceful trade union activities. He was sentenced to six years behind bars in February 2016 on the charges of ‘spreading propaganda against the system’ and ‘gathering and colluding to commit crimes against national security.’

The charges stem from his trade union activities, including peaceful demonstrations held by teachers and members of the ITTA outside the Iranian parliament in May 2015 in protest against poor wages, low education budget, and imprisonment of teacher trade unionists.

In May 2015, authorities summoned Ali Akbar Baghani to serve a suspended prison sentence issued in 2006. He was sentenced to one year behind bars and 10 years of exile to Zabol, in south eastern Sistan and Baluchestan Province.
Baghani was sent to exile to Zabol on May 1, 2016 but later was taken to Tehran’s Evin Prison without any reason.

Another Iranian teacher 64-year-old Arzhang Davoudi was arrested in 2003 for criticizing Iran’s human rights record in a documentary film titled Forbidden Iran. He was sentenced to death and 20 years behind bars on the charges of “enmity against God,” “spreading propaganda against the establishment,” “insulting the regime.” His death sentence was later reduced to five years in exile in March 2016. Arzhang Davoudi is currently held in Zabol Prison.

During his time in prison, Davdoodi has suffered torture, beatings and solitary confinement and was denied access to basic hygiene products and kept in unsanitary conditions.

In addition, Iran’s recruitment policies towards teachers are inhuman and discriminatory.

The Ministry of Education in Iran has issued a humiliating directive on the terms and conditions for employment of teachers. The directive contains a long list of chronic and persistent diseases including dental, renal, and women’s gynecological problems, which disqualify teachers who apply for employment.

Apparently most of these relate to a teachers’ appearances. For example, anyone who is cross-eyed, has ugly facial moles or skin conditions such as acne or eczema face redundancy. Having a scar or a fungal infection was also on the list.

Other rules that would usually be unnoticeable such as female infertility, cancer, bladder stones, or colour blindness are also included.

The list went viral after it was published by the FARS news agency. The Ministry of Education backed out and withdrew the circular after it was made public, but the Ministry’s spokesman admitted that it had been years that teachers were being recruited based on this directive.[1]

On the World’s Teachers Day, let us pay tribute to the honorable teachers of Iran who continue to educate Iran’s youths despite their hardships.

Caught in a web of repression: Iran’s human rights defenders under attack