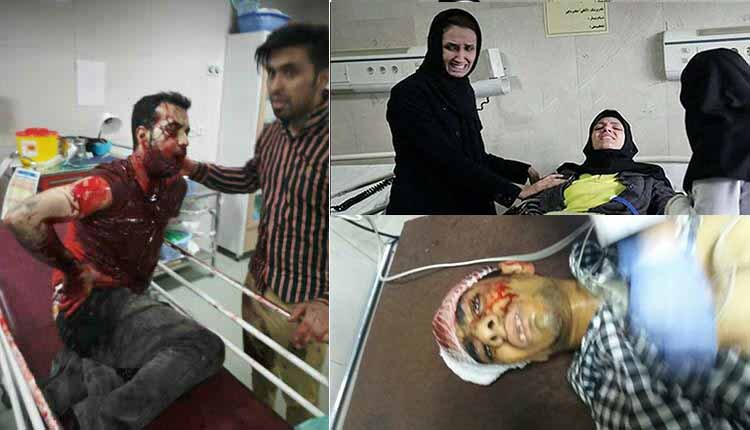 The state security forces opened fire on demonstrators who were protesting plans to divide their city – Kazerun, southern Iran – killing at least three and injuring dozens of others including women.
Sources from Kazerun say Hamid Biyun and Majid Sirous are two protesters killed by the state security forces. Unconfirmed reports also indicate a 12-year-old girl wounded by authorities has lost her life.
Over 100 demonstrators have reportedly been arrested. They include Mohammad Shafi’i, Mohammad Dehghan, Mehdi Davoudi, Masoud Mokhtarzadeh, Akbar Abbasi, Behnam Yousefian, Hossein Heydari, Mohammad Rasekhi.
Clashes between the people and the state security forces flared up as the rally continued into the night, with many locals and family members of those arrested demanding the release of the detainees.

An eyewitness said: “There were demonstrations in several points of the city. Unlike the other days, the Plainclothes started interfering and dragged it into violence.” The witness underscored: “SSF used teargas and tens were arrested with the help of Plainclothes.” “Some protestors are severely wounded and there is an unconfirmed news of numerous killed” Some residence said.

Meanwhile, on May 17, the state-run Fars news agency reported that a violent protest in the southwest city of Kazerun has left at least one person dead and six others injured. “As Fars reports from Kazerun, following last night clashes in this township one is killed and six other wounded.”

“During the last two months Kazerun has witnessed vast protests against the formation of a new township, Kuh Chenar. The crowd present in some of these gathering is estimated as 5000,” Fars reported.

According to local reports, a convoy of 40 armored police vehicles has entered Kazeroun. The convoy, which was dispatched from Shiraz, was sent to the city to quell protests. The people of Seif Abad, south of Kazeroun, have blocked the roads to prevent the regime’s backup security forces from reaching Kazeroun and suppressing the protesters.
Iranians spreading the word about the news of tonight’s protests using Farsi hashtag “Kazerun in blood,” declaring Thursday, May 17, 218, 15 as the day of public mourning for the victims.