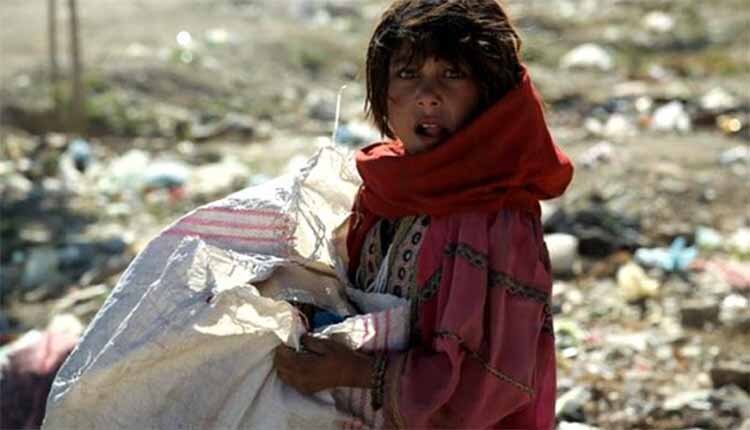 Despite international efforts to eradicate child labor and while the world’s child labor rates have fallen by a third since 2,000, the phenomenon of child laborers has remained rife in Iran.

Millions of children are either sold or sent off to work by their impoverished families. Poverty imposed by the regime is driving parents to such measures in order to keep themselves above water. To repay their debts or gain meager sums of money, some poor families rent their children as young as five and less who might experience years of violence and abuse.

According to the Vice-President of the Association for the Protection of Children’s Rights, Tahereh Pazhuhesh, “Despite global reduction in the child labor statistics, we see child labor surge in Iran.”

These children work as breadwinners, losing their only opportunity of childhood as they toil along the highways and streets, amidst the smoke and commotion or in sweatshops.

Iranian society is all too familiar with images of child laborers. Children are frequently seen working as vendors, cleaning car windscreens, or working on farms and in factories. Most of them have dropped out of school.

Under the regime’s laws, children under 15 are not allowed to work and no child can be employed in a hazardous job that poses a risk to his/her health or life. The law also sets special conditions for the work of children aged 15 to 18 years, however they are ignored by government institutions.

June 12 is the World Day Against Child Labor to raise awareness on this issue and prevent the spread of this deplorable phenomenon.

Iran Human Rights Monitor attempts to shed light on a small portion of the grim reality of Iran child laborers.

The grim condition of child laborers in Iran

The main reason driving child labor rates is extreme poverty, resulting from 40 years of the regime’s destructive economic policies. According to the latest statistics provided by experts on urban economics, some seven million children are coerced to join the workforce at an early age. (The state-run ISNA news agency – September 27, 2017)

Although Iran has officially banned the practice, the state institutions use under age children as workforce.

The municipality contractors recruit children aged 5 to 15 as cheap work force for cleaning the city or waste management.

Some contractors hire children mainly because they can pay them 70% less than the adult workers; also, due to their very young age, they are unaware of their rights as humans, let alone as workers. This makes it very easy for many contractors and investors to continue exploiting children for all kinds of heavy labor.

Elham Eftekhari, a member of Tehran’s City Council, was quoted by the state-run ILNA news agency on May 29, 2018, as saying: “Obvious grounds in the municipality facilitate exploitation of children in difficult jobs, especially the collection of waste.”

She described how municipality contractors use children as cheap work force in garbage dumps for salvage and recycling, saying, “These children not only work, but also live and sleep in garbage factories that are filled with vermin and odors; and we are well aware of the dangers these children face besides the hygienic aspect; such as the risks of mental, physical and sexual torment…”

To see his playing with his friends, Aziz seems much like any other child. But the 12-year-old boy has led a very different existence. Aziz’s ordeal began many years ago when he was forced to collect trash for 19 grueling hours a day. He says he had to work from 6 a.m. to 12 p.m. every day, with barely any breaks, not knowing where he will end up. “We wake up at 10 a.m. and start scavenging the trash at 11 a.m. We come back to the garage at 12 midnights. Then we should divide different types of garbage. We can sleep only from 6 to 10. We eat lunch at 10 and start again,” he says.

Tahereh Pazhuhesh says, “Now, ‘child labor slavery’ is one of the problems we face. Some of these children should even have permission from their master or employer to simply take a shower. They work until 12 a.m. and they do not even have 2 hours of free time per day.” (The state-run ISNA news agency – June 11, 2016)

In an interview with ILNA, a teacher from Yazd commented on this issue: “At the end of each year, I witness the hiring of young students by contractor firms. They only seek to raise their own profits by taking advantage of these children. The majority of the children and young students in our city, come from very poor families whose wages are below the poverty line; so, they are forced into these kinds of jobs, spending their precious childhood in the polluted streets and freeways.” (The state-run ILNA news agency – April 7, 2018)

All the while, Iran has signed the Convention on the Rights of the Child on September 5, 1991, and ratified it on July 13, 1994. Article 32 of the Convention which is entirely violated by the regime says, “State parties recognize the right of the child to be protected from economic exploitation and from performing any work that is likely to be hazardous or to interfere with the child’s education, or to be harmful to the child’s health or physical, mental, spiritual, moral or social development.”

Other aspects of the lives of Iran child laborers

Research shows 45% of Iran child laborers and those living on the streets suffer from illnesses such as AIDs, hepatitis and others. They also suffer from malnutrition, shortness, low weight, skin diseases and psychological disorders.

Many such children work at least 6 hours a day and don’t eat even a single decent meal, putting them at greater health risks. A large number of these children are seen carrying heavy loads causing them back problems at an early age. And since they have no access to medical care, such illnesses pave the way for further problems down the road.

Child panhandlers are sometimes intentionally disfigured to attract more money from passersby. They may be beaten if they don’t manage to collect enough money.

Dr. Minou Mohraz, Head of the AIDs Research Center of Iran, declared that, “The rate of HIV infection among Iran child laborers and street children is 45 times higher than the average.”

A member of Tehran City Council, Fatemeh Daneshvar, on Saturday, July 1, 2017, pointed out the dangers threatening the lives of these children. She said, “There are many cases where children disappear and their organs are smuggled. After some time, their bodies are found abandoned in the deserts without kidneys or eyes.” (The state-run Hamshahri Daily, July 2, 2017)

Hundreds of children have also been forcibly recruited by gangs to work as couriers of drugs.

Speaking to the state-run ILNA news agency, Sarah Rezaie, a member of the so-called Imam Ali Society, described how some children are forced to swallow drug packages to transfer them across the border. After they cross the border, they excrete them.  Many have died in the process, Rezaie said.

Sousan Maziarfar, another member of the Imam Ali Society, revealed that many of the children working in garbage dumps are not only subjected to various infectious diseases, but are also wounded by rats chewing their faces, fingers, and toes.

Despite so much suffering and a long slate of risks continuously threatening their lives, these children receive only one-fifth of a normal worker’s salary and have no support if they are injured or wounded.

Let us not forget that while Iranian children are suffering greatly, the Iranian regime allocates billions of dollars to fund its war efforts in various countries in the Middle East. It also spends billions of dollars on its military organs, state radio and television, and religious institutions for propaganda. 100 Activists call to follow up the fate of detained teacher